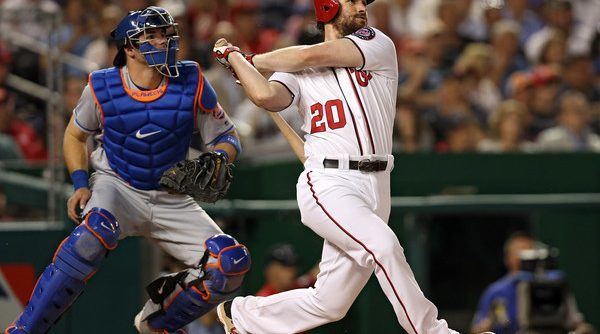 Although FP won’t be successful in making Daniel “Hits” Murphy happen, give him credit for trying because the sentiment stands. Murphy has been the best and most consistent hitter on the Nationals this far in the 2016 season. In fact, he’s been one of the best and most consistent hitters in all of baseball. He’s tied for the seventh-highest WAR in the majors according to FanGraphs. His .394 batting average is the highest in the league by over 30 points. Only 13 players in the MLB have struck out a lower rate than Murphy. He’s carried the offensive load for the Nationals for most of the season even though no one predicted such big things out of the former Met.

Now, it wasn’t like Murphy was a bad hitter before this year. For his previous seven seasons in the majors, Murphy rated as at least an average hitter, usually slightly above average. Murphy was a different type of hitter back then, though. He was always very focused on contact. His strikeout rate never topped 14%, his walk rate hung around 6% and he usually posted a batting average around .300 as a result. Murphy made plate coverage a focus but had to sacrifice power in order to do so. Only twice in his career did Murphy top even 10 home runs in a single season until 2015.

That cut off, the 2015 season, is important. While Murphy was a valuable hitter with his previous approach, he wanted to do more. And going into the 2015 season with the Mets, Murphy decided to revamp his swing and approach to find more power. People will always remember Murphy’s performance in the 2015 playoffs, highlighted by homering in what felt like every at bat in the games leading up to the World Series. The changes to his swing, though, were implemented in the offseason prior to 2015 and really clicked in the second half of that season. After struggling to hit 10 home runs in a single season prior to 2015, Murphy hit nine home runs in the second half of the 2015 season and apparently has never looked back.

The major changes in Murphy’s swing involved getting closer to the plate and getting his swing going earlier in order to catch the ball out in front of the plate and pull the ball with authority. The results are astonishing. Prior the midway point in 2015, Murphy was an all fields hitter, never topping a pull rate of 35%. In 2015, he pulled 41% of balls and so far in 2016, he has pulled 38% of balls. His before and after spray charts, courtesy of Brooks Baseball show the impact these changes had. 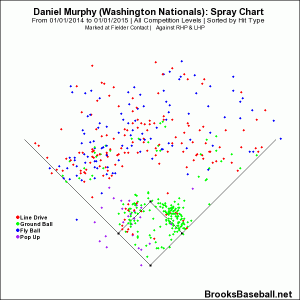 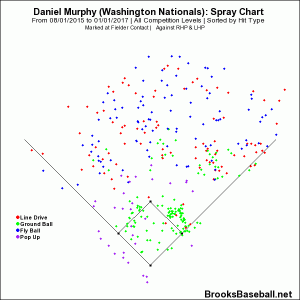 The first spray chart, from the 2014 season, shows a fairly even distribution of batted balls. But notice the big white spaces in right field. While Murphy was able to cover the entire strike zone and hit the ball to all fields, he wasn’t pulling the ball with authority. He had effectively cut himself off from the ability to hit for power. The second spray chart shows his batted balls from August 1, 2015 to today and the difference from 2014 is stark. Murphy has peppered the right side of the outfield with hard-hit line drives and fly balls and, most importantly, home runs.

With Murphy’s old swing, there was a clear hot spot where Murphy could drive the ball with power, but it was relatively isolated on the inner half of the plate as you can see from this heatmap showing ISO by area of the strike zone, via FanGraphs. 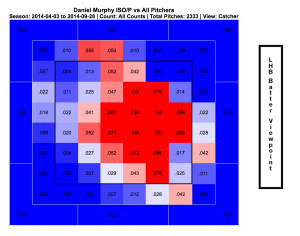 Now compare that heatmap, with its small power zone and proliferation of neutral to cold zones, to Murphy’s ISO heatmap from August 1, 2015 through Wednesday’s game. 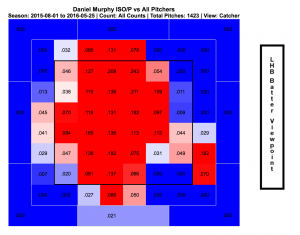 All of a sudden, Murphy’s power zone has shifted to the middle and outer edges of the plate and the cold spots can be counted on one hand. He is no longer fighting pitches off the other way for singles. By shifting closer to the plate and getting his swing started earlier, Murphy is now clobbering pitches in a majority of the strike zone.

Take a second to appreciate how impressive Murphy’s adjustment has been. Lots of hitters want to try and hit for more power. Heck, even I want to hit for more power in my slow pitch softball league. Selling out for power usually means sacrificing some contact, though. Not for Murphy. He has been able to dramatically expand the pitch locations he can drive with authority without swinging and missing more. His strikeout rate is again a far below average 11%, and he’s swinging and missing only 5.5% of the time.

Opposing pitchers, of course, will adjust to this new Daniel Murphy. If there is a hole in Murphy’s new swing, it’s obvious from the ISO heatmap above. By moving closer to the plate, Murphy isn’t as adept as hitting pitches on the inside corner with power. Pitcher’s haven’t been able to effectively attack this part of his swing, though. He’s done a good job of laying off pitches over the inner corner he can’t do much with. On top of that, the hole in his swing is so small that pitchers run the risk of accidentally running a pitch right into a hot zone and paying the price.

Now comes the time in this piece where we temper expectations a bit. Pitchers haven’t been able to solve Murphy just yet but they will keep trying. Murphy also has the majors’ second highest BABIP at .416. Sure, he is hitting a boatload of line drives, but the highest BABIP over a full season over the last 5 years was Austin Jackson in 2010 with a .396 BABIP. Murphy has already seen his batting average drop from over .400 to the .394 it stands at today as a result of a drop in BABIP over the last couple of weeks. On top of that, if Murphy continues to focus on pulling balls, opposing teams will start shifting him to even more of an extreme than they already have been, likely pulling in some balls that had been falling for hits earlier in the season.

Acknowledging the potential for some regression, Murphy is a tough hitter to solve. He knows the strike zone well and won’t venture outside of it to swing at a bad pitch often. He has the ability to put the bat on the ball on a pitch in nearly every part of the zone, and now he has figured out how to do that with power. Sure, his defense will always be lacking. But if he’s one of the best hitters in all of baseball, I think the Nationals can live with the defensive shortcomings.