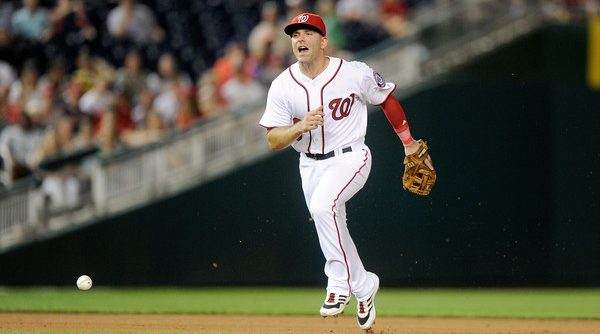 Today is May 28th. Estimates vary, but the date that Trea Turner can be called up and be under team control through the 2022 season instead of 2021 is somewhere in the range from May 29th to June 1st (the Washington Post says May 30th), so it’s possible the sun will rise tomorrow on a Nats roster with Turner as starting shortstop. It’s no sure thing that Mike Rizzo and Co. will call up Turner the moment they can, but with Turner shredding Triple A and Danny Espinosa struggling somewhat in the majors (despite another home run last night), it’s hard to think of a more opportune time.

Obviously, much ink has been spilled about the relative merits of Turner and Espinosa, including an excellent post by our own Frank Lattuca, so I won’t totally dive into that. In this post, I will attempt to take a thorough accounting of what kind of defender Espinosa is — a topic that has been surprisingly controversial — and take a look at how good (or bad) Turner’s defense might be.

Below are a few tweets expressing a range of views on Espinosa’s glovemanship.

Danny Espinosa has gone deep in consecutive games. He is a gold glove defender who would hit 20 HR’s in a full season. Two plus tools. #Nats

@AndrewFlaxTNB @em_dash01 Espi is so overrated as a fielder. He’s got + arm strength, but range and hands aren’t as good as other shortstops

@AndrewFlaxTNB @em_dash01 His range and hands are average at best. Without that arm, he’s a AAA player.

@DaProc keep in mind, I think Espinosa’s defense at short has been highly overrated.

@mikeaxisa It’s bad at the plate, but Espinosa >>>> Turner with the glove.

@DaProc i’d say most likely scenario is that they’re a virtual push. ~+/- 5-10 runs or so in either direction.

I repeat that Espinosa’s defense has really not impressed me apart from the strong arm.

That’s quite a span. Is Espinosa a Gold Glover, i.e. the best defensive shortstop in the NL? Or is he overrated, with a good arm but poor other attributes? Is he miles ahead of Turner, or are they in a virtual tie?

The one thing everyone seems to agree on is that Espinosa has a cannon, and the stats back that up: Espinosa has three of the five hardest throws by shortstops this year.

But how do Espinosa’s hands and range stack up, and how valuable is the whole package?

Among the 54 shortstops with at least 500 innings at the position since 2014 (Espinosa has 539), Espinosa is 16th in FanGraphs’ Range Runs per inning. 500 innings is not as big a sample as we’d like, but it will have to do for now, so take this with a grain of salt.

17th of 54 would put Espinosa in about the 70th percentile in range, which is decidedly above average. But most players above Espinosa are still starting MLB shortstops, while many below him are retired or have moved off the position. Call it above average. For reference, he is in a dead heat with Ian Desmond.

Espinosa fares better in Error Runs, which obviously includes throws but which we’ll use as our “hands” metric. He places 12th, just ahead of Andrelton Simmons. While this doesn’t measure exactly what we’re looking for, it’s enough that we can say Espinosa’s hands are also pretty good.

For the overall value estimate, we turn to Ultimate Zone Rating per 150 innings. By this metric, Espinosa is the 11th-best defensive shortstop in baseball over the past three years. Like the other two stats, that ranking out of 54 looks good, but the ones ahead of him are still around. Let’s look at this year’s shortstops to see how Espinosa measures up now.

Of the 10 ahead of Espinosa, only Ryan Goins and Miguel Rojas are no longer starting (Simmons and JJ Hardy are out with injuries, but we’ll still count them). We also need to add in Manny Machado, who shifted over from third after Hardy’s injury and has immediately become one of baseball’s best defensive shortstops. Of course, only one of he and Hardy can start if both are healthy, but we don’t need that sort of precision, especially given the razor-thin lead Espinosa has on Corey Seager.

From these numbers, we can conclude is that Espinosa is roughly the 10th-best defensive shortstop in baseball. He isn’t a Gold Glover, but his hands and range are pretty good in addition to his arm. For reference, the 10th-best defensive shortstop last year (min. 400 PAs, which gets us to 32 players) was Troy Tulowitzki, who saved 9.1 runs. Ninth-ranked Hardy saved 12.2 runs, so let’s average that out to 10.5 runs saved. Espinosa is already at 6.3 runs saved in 2016, but defensive statistics are notoriously fickle in small samples.

While Espinosa may not be an elite defender, the salient point is how his glove compares to Turner’s. Many believe that Turner is a weak defender and has a sub-par arm, but scouting reports indicate that’s not true. 2080 Baseball rated his arm a 55 and his glove a 50 on the 20-80 scouting scale, where 50 represents average. MLB.com said the same. Baseball Prospectus (subscription required) gave his arm and glove 55s. Local favorite Ryan Sullivan of NatsGM.com called Turner’s arm and long-term defensive profile “above-average,” which corresponds to a 55 grade. The scouting consensus is that Turner should be at least an average defensive shortstop.

Last season, the median defensive shortstop (let’s choose 16th-ranked Freddy Galvis) saved 5.9 runs, or just 3.1 fewer than 10th-ranked Tulowitzki and 4.6 below the average of Tulowitzki and Hardy. While Espinosa could exceed Tulowitzki’s mark, or Turner fall short of Galvis’, the difference between them on defense is not the gulf some believe.

As a final note, some have lamented how the team will miss Espinosa’s playmaking arm. There’s no denying his throws can be spectacular.

But the Nats made a similar transition when replacing the first player in that video, Michael A. Taylor, with the notoriously noodle-armed Ben Revere. The center fielder’s arm comes into play less often, but the Nats went from one of the game’s best arms to perhaps its worst. I can’t speak for everyone, but I haven’t seen a lot of consternation over Revere’s arm. A great arm is an excellent thing to have, but when you replace it with an above-average one, the difference is not quite as glaring as you might think.