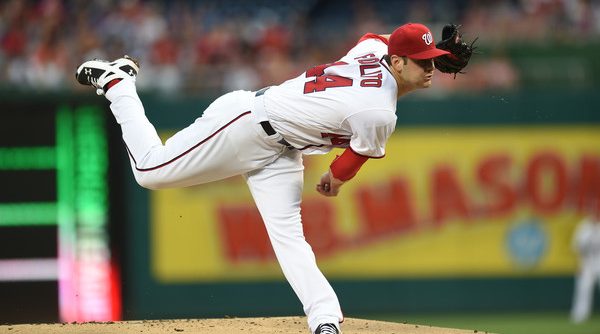 The Nationals have a thing about calling up stud pitching prospects on Tuesdays in June. The OG of Nats pitching prospects, Stephen Strasburg, set the bar pretty high for MLB debuts. He went seven innings, had 14 sensational strikeouts against the Pittsburgh Pirates and allowed only two runs, both coming on a two-run home run. Despite a one-hour rain delay to start of the game, Lucas Giolito, the next Nats hyped pitching prospect, lived up to Strasburg’s lofty precedent before his night was cut short by yet another rain delay.

As one of the most highly regarded prospects in all of baseball, the book on Giolito coming into Tuesday night’s game was pretty well written. His fastball was known to touch the upper 90s, sitting mid-90s. At 6-foot-6, Giolito is not only a towering presence on the mound, but also his size generates downhill plane that tends to induce a lot of groundballs. On top of the fastball, Giolito possesses a famous and “bowel locking” curveball. To top it off, Giolito has a changeup that is still a work in progress but even in its current state was expected to be an adequate pitch. The biggest concern with Giolito was control. The Nationals infamously made some mechanical tweaks to his delivery earlier in the year that were later scrapped after Giolito’s command only worsened. Once he reverted back to his old ways, Giolito cut down drastically on walks while maintaining his impressive strikeout totals in most of his outings.

Of course, pitching in Double-A Harrisburg is a world away from pitching in The Show. But over four innings at least, Giolito looked right at home facing big league hitters. He allowed only one hit to the Mets. The start was not as electric as Strasburg’s debut, though, at least in terms of strikeouts. He registered only one punch out on the night, but the start was a model of efficiency, throwing only 45 pitches over those four innings. If it wasn’t for the rain, he likely could have gone another two or three innings at least at the pace he was working.

It’s only one game, and a rain shortened outing at that, but let’s see what we can glean from Giolito’s 45 pitches. Giolito went to the fastball often, over 75% of the time against the Mets. He averaged 94 MPH with the pitch and hit 96 MPH at his max, according to PITCHf/x. He struggled to keep the fastball in the zone, throwing it for a strike only 56% of the time, likely leading to his two walks on the night. Despite the major league caliber velocity, the fastball got only one swing and miss against the Mets. It got put into play seven times but of course only one fell in for a hit, and it was a bit of a duck snort of a hit at that off the bat of Curtis Granderson.

Where the fastball struggled, Giolito’s curveball was on point. Most impressively, he kept the pitch in the zone. On less than 10 pitches, he got one swing and miss, two called strikes and four balls put in play that resulted in outs. The control over the pitch was the most impressive part of the night. With the incredible drop Giolito can generate on the pitch, the ability to keep the pitch in and around the strike zone makes it a huge tool for Giolito going forward.

Giolito featured his changeup a few times (classified by PITCHf/x as both a curveball and slider originally but clearly his changeup based on speed and movement). It’s obviously not a pitch he’s totally comfortable with yet, not unlike a lot of young pitchers still learning to harness their third best pitch. Although it is his third best pitch, he was willing to break it out against big league hitters and it didn’t get clobbered.

All in all, it’s a great first start for the much hyped Giolito. On the positive side, Giolito was highly efficient and limited hard contact. Perhaps most importantly, he looked comfortable in the spotlight. On the negative side, Giolito’s command issues popped up, as expected. He relied heavily on his fastball, which won’t cut it in the future if he can only find the strike zone 55% of the time with the pitch. Depending on how Strasburg’s injury progresses and how Gio Gonzalez pitches in his next couple of starts, Giolito may just get the chance to keep working on those negatives in the big leagues.