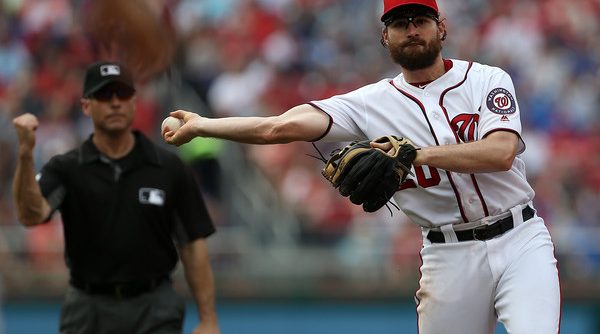 In a little less than a month, the All-Star Game will be here. That means that, in just a few weeks, the All-Star rosters will be announced, bringing an end to the overhyped, over analyzed, and over maligned process that is selecting the American and National league teams.

Every few weeks, MLB decides to roll out the voting totals , and the results so far do not show a strong showing for the Washington Nationals. As of two days ago, the team has just one starter — Bryce Harper — with deserving candidates Wilson Ramos and Daniel Murphy trailing Yadier Molina and Ben Zobrist, respectively.

While it would be disappointing to see Murphy and Ramos relegated to the bench, those results would not be a surprise. After all Molina has his longevity and backing of St. Louis Cardinals fans in his corner, while Zobrist’s role with the Chicago Cubs gives him an advantage. Certain fan bases turnout in high numbers for online All-Star voting, a process that offers the same satisfaction as opening a self-authored article and constantly refreshing the page in hopes of increasing the traffic numbers.

However, instead of tearing apart this tedious process, my goal is to make it more fun. The goal should be to maximize the enjoyment of 35 ballots by following these simple steps.

All-Star voting always begins at some ridiculous time of the year. Rather than subjecting yourself to small sample sizes or picking players from one roster, wait until we actually know how the season is going to play out.

What is the best time to vote? If you haven’t voted, start now and binge vote as I did while writing this article. It’s fun, and you can reach your maximum five ballots for a 24 hour period in seconds.

At the bottom of every ballot are three offers, already checked, for emails from MLB and Esurance. Uncheck all of these. This ensures that there are no lasting affects from your reckless and unwieldy efforts to thwart an all Cubs/Cardinals All-Star team, and your inbox will thank you.

The best thing about All-Star voting beginning in spring training—or some time shortly thereafter—is that by this time of year, the ballots become a time capsule of pre-season expectations. One could argue that this waters down the process, but I think this should be celebrated.

On the 35th ballot, pull out all the stops and embrace the overlooked. Omar Infante might’ve been designated for assignment by the Royals and replaced by Whit Merrifield — Charity Royall’s true, yet unobtainable love in Edith Wharton’s Summer — but that doesn’t mean he can’t appear in the All-Star Game. While you’re at it, round out the double play combination with former White Sox shortstop Jimmy Rollins, and create a two-thirds Triple-A outfield with Eddie Rosario and Delino DeShields Jr.

The best part is that this method does not need to be limited to the American League. Kolten Wong could get the starting nod at second base, and light-hitting A.J. Pierzynski deserves a long look behind the plate.

Of course, there’s also room to fill out both rosters with underperforming/injured players from all teams, so this ballot requires careful consideration. But as a way to top off your voting experience, it simply can’t be beat.

(Note: After writing the above section, I remembered that the character from Summer is named Lucius Harney. However, I’m sure that Lily Bart owed a debt to Whit Merrifield in The House of Mirth.)