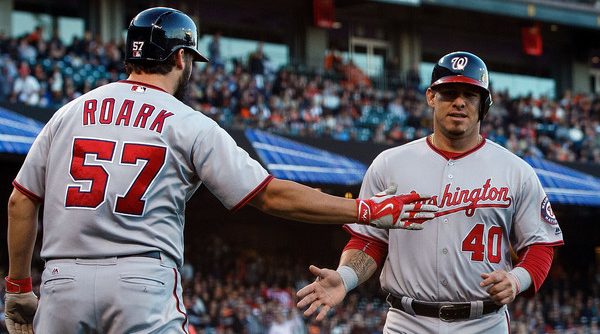 Fortunately, the first two games against the San Francisco Giants were wins. Otherwise, I might have needed a break from Twitter for a while. But do the loud voices have a point? Let’s look at the data so far from this year.

First, the Nationals are a pretty good team overall, and they got that way by beating up on the bad teams and holding their own against good teams. That is how everyone does it, and the Nats are no exception. This year, the Nationals are .545 against teams with a winning record. That puts them fourth behind the Texas Rangers at the top (with an absurd .672 record against winning teams) and solidly head of the middle-of-the-pack Colorado Rockies at .464.

Beating up the bad teams is also not a problem for this club. The Nats are .638 against teams below .500, and that runs sixth behind the St. Louis Cardinals leading the way with a .694 record. When you club wins three out of five against bad teams, it can seem calamitous when they can only muster splits against good teams. That is what happens when you are used to winning, but the enemy gets a vote. And it is exceptionally hard to win in this league against good teams.

That is only one half of the equation. To be the best you have to beat good pitching, especially in the playoffs. When you face the triple threat of Madison Bumgarner, Johnny Cueto, and Jeff Samardzija in a seven-game series, you better be able to win some of those games if you want a ring. Fortunately for the Nationals, they have been able to do that this year.

I took a look at the games when the Nats faced a top-20 pitcher (according to FanGraphs’ WAR rankings) and it turns out they did okay. Out of the 14 games sampled, the Nats went 6-5 and in three games the opposing pitcher received a no decision because the Nationals were leading or tied going into the latter innings but their bullpen managed to lose the game. For a small sample size, that is right where you want to be. Couple that with the good record against teams with a winning record, and I like this club’s odds when it comes to winning a seven-game series.

So don’t fret if this team drops the next few against the Giants; winning four out of seven is right where you want to be.