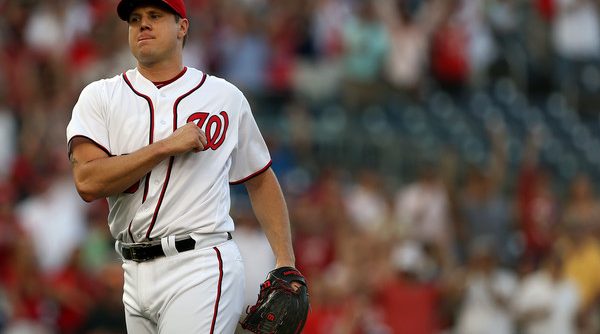 I cannot believe I am asking this question. How far have we come as a fan base where we can even consider missing a player like Jonathan Papelbon? I was at the exhibition game in Nats Park this year. You know the one, the first time Nats fans got to greet Papelbon after choking out the MVP in the dugout last year. It wasn’t all sunshine and roses. A good number of fans cheered to support our closer, and a healthy majority – to put it nicely – let him know how they felt.

But now, after Papelbon hit the DL, the Nats were all of a sudden without a closer. Great! Some may say, we don’t need that guy anyhow. The Nats will be better off without him! Well, going 16 out of 18 before hitting the DL is pretty good and, even though teams win 95% of games they are leading heading into the 9th inning, there is something about those last three outs that makes closers special. So did we actually miss Papelbon?

During this two-week stretch, the Nats employed a variety of different 9th inning looks to seal the deal. They tried the matchup game with a healthy dose of Shawn Kelley to work through those latter innings. Turns out, it is a lot harder to save games than people give credit for. Sammy Solis found out the hard way giving up five to the Cincinnati Reds for the loss, and, while not a save situation, was a late inning miscue. Oliver Perez and Matt Belisle also learned from personal experience as their combined efforts led to a blown save in the Cubs series. All in all, if the club didn’t have Kelley to credit with four saves during Papelbon’s DL visit, this team would have been in a world of hurt. And as we saw in the recent opening game against the New York Mets, the bullpen has its shaky outings after giving up five runs after Lucas Giolito left the game.

I wrote earlier this year about my confidence in Blake Treinen and Felipe Rivero and I still have confidence in their stuff. They will be big-league closers someday, but today is not that day. Papelbon may not have shutdown stuff anymore, but he knows what it takes to get guys out in the late innings. I would love to have a flame-throwing Aroldis Chapman coming out of the pen to blow people away, but, to quote an often maligned figure in Washington Nationals’ history, Papelbon is our closer. And from his “Obama can’t ban these guns” cut-off T-shirts to his “Paparista” skills making coffee during games, Papelbon has grown on me, and, I think the fan base missed him maybe just a bit more than we would all like to admit.