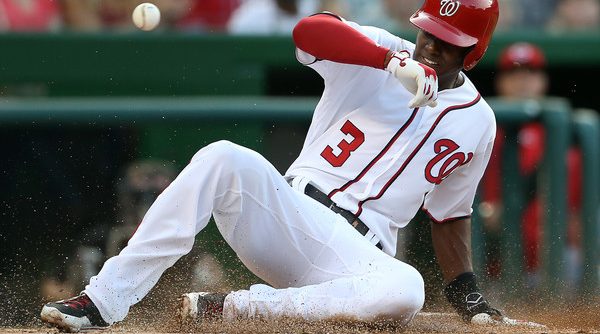 Michael Taylor’s sometimes promising but largely inconsistent time in the majors was halted on Monday, when the Washington Nationals optioned the outfielder to Triple-A Syracuse. While the move was needed to clear space for reliever Jonathan Papelbon as he returned from the 15-day DL, it does raise some interesting questions about Taylor’s role with the team.

On multiple levels, the Nationals are in a position to dangle Taylor as a possible trade option. Ben Revere is likely to get every opportunity to turn around his season, while centerfield is quickly becoming one of the deepest positions in the minors. Andrew Stevenson and Victor Robles were both recently promoted, and the team recently experimented with playing shortstop Trea Turner in center at Syracuse.

With Taylor coming down, Turner will move back to the infield. However, the Nationals have made a habit over the years of moving players to the majors despite limited experience at a particular position, such as with Anthony Rendon and Danny Espinosa at second base, suggesting that Turner could patrol centerfield in Washington at some point this year.

That would give them some flexibility in weighing the future of Taylor, an inconsistent but undeniably tantalizing player. He has shown glimpses of power over the past season and a half in the majors, but that was often offset by poor contact skills—a problem that continued into this season, as evidenced by his 31.5 K% in 60 plate appearances.

Should another club view Taylor’s issues at the plate as correctable, he could become the major piece the Nationals need to package in a trade. Of the team’s minor league options, Lucas Giolito, Turner, and Robles appear to be untouchable, and it’s possible that right-hander Reynaldo Lopez is pitching his way into that group. Beyond those players, the system presents some options but there is some drop off in potential. Taylor, meanwhile, has shown the promise to be an excellent defensive centerfielder with power in the past and comes with major league experience.

To some clubs — especially during a trade deadline that is limited in high-end talent — this might appeal more than some of the Nationals’ minor league options. Given the opportunity to play regularly over the remainder of the season, Taylor may settle in and prove to be a viable long term option for another team. The Nationals would also have a chance to trade from a position of strength to address the major league roster.

Another scenario is that Taylor, perhaps in a very short time, works his way back to Washington. Possibly a quick turnaround in the minors will help, but he will still find himself behind Revere if the veteran outfielder makes strides over the next few weeks.

Over the long run, the move down to Syracuse may very well be a minor bump in the road for Taylor. Whether he is given the opportunity to prove himself in Washington or elsewhere remains to be seen.