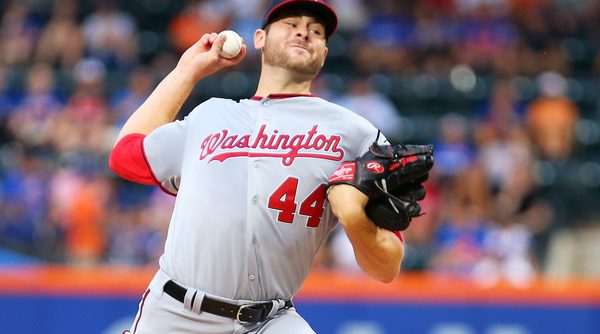 Twitter was briefly set afire today by ex-Nat Mark DeRosa’s suggestion on Twitter that the Nationals give up a king’s ransom in young talent for a pair of controllable and talented White Sox in their prime.

In response to the furor, Nats Twitter’s resident Washington Post contributor James O’Hara penned an article singing the praises of Sale and Eaton and espousing the deal. There’s no denying their talent, but one line in this piece caught my eye:

“Prospects are prospects, and while Giolito, Turner and Robles rate as some of the best in the game, their status as prospects means we can’t know for sure what they’ll do when given full-time opportunities.”

That’s true! Prospects are inherently very risky, and their outcomes are all over the place. O’Hara also correctly notes that Sale and Eaton represent an opportunity to have that production in the present and near future, while Bryce Harper is still under contract, as opposed to waiting years for the youngsters to reach their primes.

But this made me think: How much, in concrete terms, are these prospects worth? As volatile assets, it can be hard to peg them for a certain value, and the transactions involving them are so different that it can be hard to derive a value from that. With this difficulty in mind, it seems the common baseball discourse hews to the two extremes: Never trade any prospect for anything because they could all be superstars, or always trade any prospect for anything because they’re not guaranteed to become anything. The former is often my stance, while O’Hara seems to tack toward the latter in his article.

But historical data exists about prospect rankings, and we can look to see how past similarly ranked players have performed. Conveniently, FiveThirtyEight did exactly that. They went through and found the wins above replacement produced by every player ranked 1-100 each year by Baseball America, and then averaged those out and fit a curve to that data to find the expected WAR in the following seven seasons, or roughly the amount of time before a player reaches free agency, for each spot.

On its Midseason Top 100 Prospects, Baseball America ranked Giolito the number 4 prospect in baseball, Turner number 5, and Robles number 13. Eyeballing FiveThirtyEight’s chart, I see that players ranked in those spots should produce 13, 12.5, and 10 WAR over the next seven seasons. That’s a combined 35.5 WAR at extremely cheap salaries.

Here is the complete list of players to produce at least 35.5 WAR (according to FanGraphs) since the start of 2010, or over the past 6 ½ seasons: Clayton Kershaw, Mike Trout, Miguel Cabrera, Andrew McCutchen, Adrian Beltre, and Robinson Cano. That’s it. This is not to say that these are the only type of players for whom a package like those three could be traded; 35 WAR from one player is clearly more valuable than it is from three. But that’s a very significant amount of production.

Prospects are also less valuable than those raw WAR totals because they are riskier than established players, and teams are risk-averse. But the Nationals’ group is less risky than most: Turner and Giolito have already reached the majors, putting them closer to achieving their potential than many prospects that flame out.

Additionally, we should not forget that veterans are much riskier than we tend to think. Sale is the fifth-most valuable pitcher in baseball since the start of 2013 and is only 27. But only six of the top 20 pitchers by WAR from 2010-12 are also in the top 20 from 2013-16. Meanwhile, five of the top 20 from 2010-12 are no longer in the majors. Sale has youth on his side, but his delivery and frame have long given observers pause about his health.

Weighing this deal is a very challenging endeavor for a number of reasons. It involves considering the exchange rate between present WAR and future WAR, another task FiveThirtyEight attempted last year. Coming to a quantitative answer is basically impossible, so any subjective answer you have is probably pretty justifiable. But don’t discount the value of Giolito, Turner, and Robles. Dealing them away could really come back to haunt you.