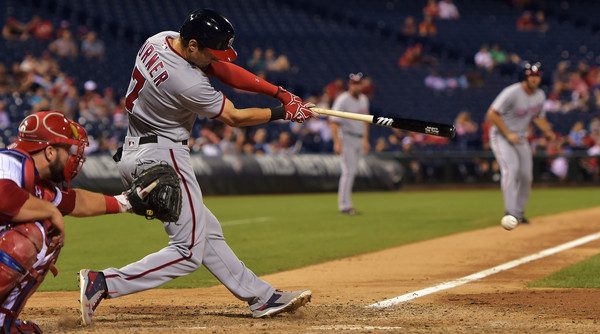 Trea Turner has taken the big leagues by storm. Coming into Tuesday night’s game against the Phillies, Turner was hitting .341/.361/.538 with 17 stolen bases before tacking on two more hits and a stolen base. Over those 42 games, he’s already accumulated 2.1 WAR, according to Fangraphs. It’s obviously early in Turner’s career, but those early returns suggest that Turner is set for a long career in the big leagues.

That career didn’t start as quickly as Turner and certain segments of the Nationals’ fan base would have hoped for. Despite coming into the 2016 as one of the highest rated prospects in all of baseball, Turner started 2016 off in the minors. All he did there was hit over .300 and steal 25 bases in AAA. But it wasn’t good enough to usurp shortstop Danny Espinosa and get a call up to the big leagues permanently until mid-July, and even then, Turner came up as a center fielder. Letting one of the most dynamic young players spend half the season in the minor leagues likely won’t hurt the big league team’s prospects in 2016 because the team has performed so well. The Nationals have held a sizeable lead in the NL East both before and after Turner’s call up. However, the decision to keep Turner out of the Show for so long will have a big impact on Turner’s future.

MLB’s service time rules are rather arcane. TL;DR: Players who make the big leagues generally are under contract for six seasons with the big league squad. Six seasons does not equate to 162 games but rather 172 days of service time. Had the Nationals brought up Turner on day one of the 2016 season, he would be a free agent after six years in 2021. By waiting until halfway through the season, Turner won’t hit that service time cut off until the middle of his seventh year in 2022. Essentially, the Nationals bought themselves a whole extra year of Turner on his cheap, rookie deal by holding him down in the minors.

From a front office perspective, this is a great deal. For the league minimum salary of $507,500, the Nationals are getting a starting caliber player who can play multiple positions this season. He’s going to continue to make the league minimum until he gets a series of small raises via arbitration starting in 2019 (possibly even 2020, depending on his “Super-2” status) and will be under contract through the 2022 season. The Nationals will be getting quite a deal that will give them financial flexibility to spend elsewhere (and by elsewhere I mean on the dump trucks that will haul the mountains of cash to Bryce Harper).

If Turner were to hit free agency after this season, though, he would make substantially more than the $500k he’s going to get in 2017. In free agency, the market takes over. And the market has dictated that teams are willing to pay somewhere in the vicinity of $8 million per win. Based on Turner’s 2.1 WAR, he’s worth about $16 million, $15.5 more than he will actually get. And that’s only for a partial season; if Turner played 162 games at his current pace (however unlikely that may be), he would be worth 8.1 WAR, or a shocking $65 million.

The front office will get cheered for this, of course, because they got great value in Turner and worked the system (though they will never say that out loud) to keep Turner for as cheap as possible. Most fans are probably OK with that, and who can blame them? Turner and players like him are making more money than most people can possibly imagine just for playing baseball after all, right? Professional athletes don’t really garner a lot of sympathy when it comes to their finances, despite Latrell Sprewell’s best efforts.

But you should realize that making that argument puts you on the side of the billionaire owners footing the bill, supporting them saving a couple million dollars. Turner’s $500k salary is a drop in the bucket to owners like the Lerners, who are worth more money than most of their super-wealthy peer group of MLB team owners. To cheer the team for paying Turner less than his fair value based on a contract that was negotiated for him by the MLB Players Union long before he was drafted is to cheer for the even more wealthy owners.

Now that’s not to lay blame at the feet of the Lerners or the Nationals. They are operating within the system constructed by MLB and the Players Union to bring a winning ball club to DC. Every team operates in the same system and uses the same strategies (see: Cubs, Chicago and Bryant, Kris). But in order to afford paying Harper down the road, the Nationals will have to keep finding young guys like Trea Turner and paying him less than he’s worth.