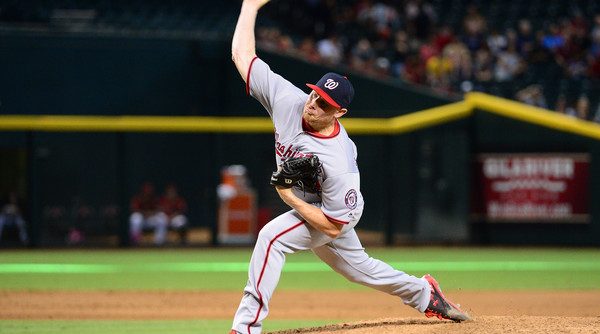 Forty-eight. That’s the Nats’ Magic Number to clinch the National League East. On Thursday morning, sitting atop the NL East at 64-44, the Washington Nationals have a magic number for 48.

That, frankly, is not a lot for August 3rd.

While people are feeling good after a three game sweep of the Diamondbacks, this still might not be a popular opinion these days: The Nats are a very good team and are in very good shape to win their third NL East Championship. I don’t like to tell other people what to do much anymore, but it’s time for #youpeople to start enjoying that.

An aside: I’m a new parent, as I’ve written about before. While I’ve always been an A-type worry wart, having a new child (as many people will attest to) sends that into a kind of hysteric hyper-drive. Just yesterday, #Baby101 had to go to the doctor to have a rash looked at. She was a regular old baby, happy, no fever, just, you know, has a rash. There was a 99.99999% chance that this was nothing but your regular old baby rash and it would just clear up on its own. Did I, however, look up every possible rash and convince myself that it could maybe, possibly, be some really dangerous baby rash or possibly the bubonic plague, and that my child was in mortal danger? Yes, I guess I did. I didn’t really believe it was that, but I spooked myself.

Spoiler alert: The doctor said it is a regular old baby rash that will clear up on its own and nothing to worry about.

So too does Natstown furrow their brow, wring their hands, ignore the many good signs exhibited by the team in favor of pulling out hair and howling “will no one think of the lack of production from the first baseman!”

Perhaps we are all the anxious parent of a 12-year-old baseball club, conditioned by a spirit of protecting the things we love to focus on what could go wrong rather than all the things that are going right.  But there is a lot going right.

Don’t believe me? The Washington Nationals are 8th in MLB in scoring (4.74 runs per game) and second in runs against per game  (3.26). They’ve done that, basically, without a first baseman or centerfielder who can hit, and the reigning NL MVP in a three month slump. They’ve got surprisingly good and consistent production from Daniel Murphy and Wilson Ramos, and long spurts of production from the likes of Danny Espinosa and now Trea Turner.

They’ve done this with a bullpen that fans actually panicked about. Think about that. Think about how awful you thought the bullpen was, and then reacquaint yourself the fact that they are third in the NL by WAR, and have the best ERA of any bullpen in baseball.

And then they added Mark Melancon to that.

Even if you’re skeptical of all of that, look at the remaining schedule. If the Nats just scrape by and win each home stand by one game and then split on the road, That’s 28-26, Good for 92-wins. Not to put the old jinx-a-roo on it, but that seems to be selling the Nationals short in comparison to their competition.

I’d say we could fairly break the rest of the season down into 9 games against good teams (the Indians, Orioles, and Giants), 21 against OK teams (the Mets, Marlins, Pirates, and Rockies), and 24 against bad teams (the Diamondbacks, Braves, and Phillies). Let that last one sink in.

If we are conservative and say they go 3-6 against the good teams, 11-10 against the OK teams, and 16-8 against the bad teams that’s 30 wins over the close of the season, which puts them at 94 wins and likely the NL East division champions. If the Nats go 30-24 wins, they’d only need Miami (assuming they stay in second place) to lose 18 (some of which might overlap with games against the Nats) to clinch the division (even less for the Mets if they surge back into second).

No matter how you cut it, or what you were mad about before today, the Nats are in first place with 64 wins, 7 games up on the Marlins, and only behind the Cubs in the National League. They qualify as a good team. Even if you want to invalidate their good record because they have piled up wins against bad and mediocre teams (as if that is somehow different from what any other club with a good record does), they have 24 games left against bad teams. So even just beating those teams will get them most the way home.

I don’t know about you but playing modestly better than .500 baseball seems entirely achievable for a Washington Nationals team that has already played 20 games better than even this year.

Being judicious and cautious is a virtue, but at some point worrying for the sake of worrying is counterproductive. We can choose to spend the next few months imagining every terrible thing that could happen, or we could start really enjoying a very good baseball team.