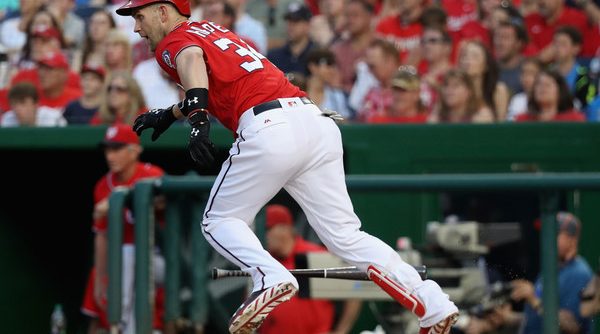 Last night in the seventh inning of Game 1 against the Phillies, Philadelphia starter Jeremy Hellickson lost control of a pitch that struck reigning MVP Bryce Harper squarely on the outside of his right knee. The collective beating heart of NatsTown skipped multiple beats as the left-handed slugger stood there while Dusty Baker and head trainer Paul Lessard examined Harper, finally escorting him to first. Things would not improve from there.

Harper was clearly moving gingerly, lacking his usual fire and quick-motion reflex. Immediately after the hit-by-pitch, Hellickson proceeded to send three straight pick-up throws to first base in an attempt to pick off the wounded slugger—each one closer to recording an out than the last. Eventually, left fielder Tyler Goeddel picked Harper off of first base on a lazy fly ball—undoubtedly aided by the runner’s inability to slide back into first base. The situation was made more dire when the very next batter, Ryan Zimmerman, stroked a triple off of the top of the fence—though in the opinion of this writer the ailing Harper would not have been able to score from first on the hit, lending credence to the opinion that he should’ve been removed from the game after the HBP. Chris Heisey came out to the field for the bottom of the seventh inning, as Harper went down to the clubhouse for treatment.

As of this posting it is not known whether Harper will be missing any significant time due to this knee injury, but I am here to tell you that even with a 15-day DL stint that the Nationals will be OK for the following reasons:

Obviously this type of production isn’t going to replace an in-form Harper, but it will sure help out All-World Daniel Murphy and Trea Turner (who should be called up this week). Besides, the team has gotten to a 31-21 record with both Werth and Zimmerman co-captaining the struggle bus.

Clearly, the Nationals do not want to lose Harper for any length of time, but if they needed to go without him for a couple weeks, now is most certainly the right time.