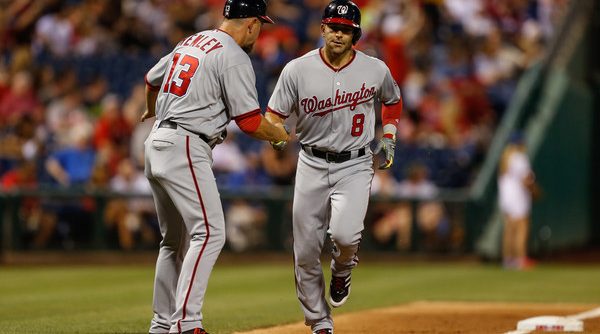 I bring you good tidings. As the keeper of the #TDER, I can tell you The Danny Espinosa Renaissance is once again upon you. Rejoice.

A few weeks ago I wrote about the potential pitfalls of relying on Trea Turner to be called up from the minors and instantly help the Nationals. Today I make the case not to panic about Danny Espinosa, and that his good week is an indication of good things to come.

There will be a temptation to boil these two columns down to “Frank hates Trea Turner and is unreasonably in love with Danny Espinosa.” To people who want to do that I can only ¯\_(ツ)_/¯. My point regarding Turner is only that it is foolish to pin your hopes for turning the offense (or whatever) around on a prospect that would likely bat 8th. Similarly, I’m not about to argue Danny Espinosa is playing great, but only demonstrate that the case against him has been greatly overstated.

Espinosa’s .199/.297/.325 line going into Wednesday night’s game was pretty gross, no two ways about it. If you like your stats advanced, a 64 WRC+ would be last among all teams hitting in the 8th spot.

That said, Espinosa has had a pretty good week. A wRC+ of 108 and 3 HRs is pretty solid production from the very bottom of your line up. (Note: He added a fourth last night).

But everyone can have a good week — why should you believe this actually bodes well for Espinosa rather than simply a blip?

It starts with his Batting Average on Balls in Play (BABIP). Espinosa, in good years, hits about .300 on balls in play — that’s what most players end up around, by the way. Currently, Espinosa’s BABIP is .233. Very low. The balls in play aren’t turning into hits, but outs. The last time it was this low was 2013, when in 44 games it was just .202 — no doubt in due in part, if not fully, to the fact that Espinosa was playing with a busted wrist and shoulder. Unable to make solid contact, Espinosa struggled mightily at the plate.

A low BABIP is indicative of a guy with some hard luck, and something we’d expect to turn around. It isn’t conclusive though. Sometimes (like in 2013) there are reasons balls in play aren’t becoming hits.

The good news is I think a lot of Espinosa’s peripheral numbers indicate a guy who is a tad unlucky rather than broken. He seems to be doing everything except getting a hit.

Never in his career has Danny Espinosa been walking at such a good rate, striking out at such a low rate. Now, a 8.8% BB-rate and 23.7% K-rate might not make him the next Ted Williams, but Espinosa has had better years while having a worse eye at the plate.

He’s not just seeing the ball better though. FanGraphs lists balls in play with soft, medium, and hard contact. As you might imagine, the harder you hit the ball the more likely you are to get on base. Espinosa is is hitting more balls in the medium/high range than at any other time in his career. Only 14.5% of his hits are soft, much lower than in previous years. He’s hitting line drives at the same clip as he ever has. He’s hitting more fly balls than ground balls. That’s probably going to come in handy as the weather gets warmer.

So he’s seeing the ball better, hitting the ball harder and not getting on base. To me, that adds up to “will turn around” rather than “needs to be replaced.” Even a small increase in BABIP will start to pay big dividends for Espinosa’s offense.

Perhaps the most infuriating thing, though, is the focus on hitting as if that is the only thing happening in a baseball game. I get that it is easier to add up and quantify how a guy does at the plate than in the field, but every run you save is a run you don’t have to score. Defense counts, a lot, and Danny Espinosa is an excellent defender.

I’ve had a number of people dispute this, saying he’s “good not great” at defense. I frankly find this position absurd, but I don’t expect anything I say will change those minds. Defense, unfortunately, looks like whatever you want it to look like.

Still, if you put any credence in FanGraphs Defense metric, Danny Espinosa’s 6.5 rating is good enough for fourth in MLB right now among shortstops. That’s a cumulative number, and at 1/3 of the way through the season, it projects to a 19-20 by the end of the year which is more often than not a top-three shortstop defensively. It might not be Andrelton Simmons 2013, but it would be good enough to be tops in the league some years. To suggest Espinosa is good but not great defensively strikes me as either ignorant or disingenuous.

This is all the more important with a weaker fielding Daniel Murphy at second base. Turner, in Syracuse, already has eight errors. Errors can be deceiving, but what are the chances he seamlessly and suddenly gets better at shortstop when he moves up to the MLB level? Not bloody likely.

You have two weak fielding middle infielders and you are asking for balls to be hit up the middle.

Some folks just need to tinker for the sake of tinkering. If they couldn’t point to grass on the other side of the fence and call it greener, they just wouldn’t know what to do with themselves. I admit that Danny Espinosa is not a perfect player, and Trea Turner is probably going to be very good when he comes up to play every day. That day just shouldn’t be today. I’ve written previously about how Turner is likely an awkward fit for the Nationals right now, and that hasn’t changed. Espinosa is coming on, is an established and valuable quantity on defense, and the indicators we have suggest he’s going to start posting much better batting numbers soon. The Nationals are winning, scoring runs, and are in first place after a very tough May schedule. The Nats shouldn’t rock the boat based on maybes and could-bes just because they can.