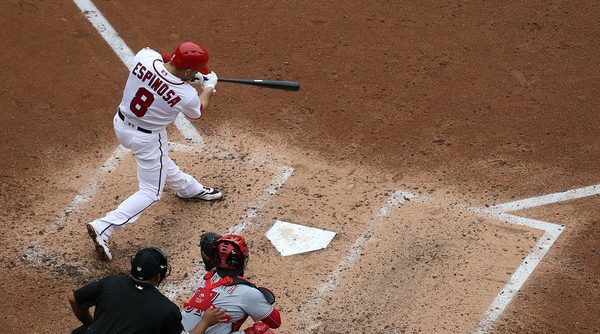 Entering this season, it was seen as a fait accompli that the Nationals would call up Trea Turner to start at shortstop on May 31, when it would be assured that the team would have an extra year of contractual control on the young shortstop. Danny Espinosa “won” the job in the spring, but he was simply a placeholder, intended to keep the six spot warm until the rookie arrived.

And it seemed that would come to pass, as Espinosa had a putrid 58 wRC+, or weighted runs created as a percentage of league average, when the sun rose on May 31. Of the 141 hitters to qualify for the batting title last season, only one had a wRC+ below 58.

But for whatever reason, the Nats stuck with Espinosa. And somewhat surprisingly, he delivered on their faith. He hit .309/.418/.704 for the month of June, good for a jaw-dropping 186 wRC+. He has cooled off somewhat in July, with a 109 wRC+ for the month, but his scorching June has brought his season wRC+ all the way up to 104, a jump that would have been inconceivable just six weeks ago.

But this outpouring was not totally unforeseen. Our own Frank Lattuca, the standard-bearer on the pro-Espinosa side, wrote that Espinosa’s offense had been much better than his miserable numbers indicated. In light of this, and with small sample size concerns in mind, I will break down Espinosa’s full-season numbers to see what changes he has made, and whether he can maintain his success.

On the year, Espinosa is hitting .239/.334/.458 with a 104 wRC+, all of which (except batting average) would be career bests. His on-base percentage is inflated by his many hit-by-pitches, which may not be sustainable. He also has an 8.7% walk rate, tied for his career high, and a career-low 24.7% strikeout rate.

So his eye is improved and he’s getting better results because of that, right? Well, maybe not. Espinosa’s contact rate is 71.4%, almost exactly his career rate. But his swing rate is down significantly to 48.8%, the lowest it’s been since 2011. But that drop is significant on pitches both in and out of the zone, so it’s not as though he’s spitting on balls and swinging at strikes all of a sudden.

Here’s where I speculate a bit: Espinosa may have simply decided to stop swinging as much, without too much regard for the coming pitch. Given that he was such a free swinger, swinging less (even if the swings he still makes are no better) still helps him cut his strikeout rate.

Another interesting aspect of Espinosa’s improvement is that he has had such success despite a very low batting average on balls in play. His .261 mark is far below his .295 career mark and would seem to call out for regression. But Espinosa has become an extreme fly ball hitter, as his 46% fly ball rate is by far a career high and ranks 11th of 168 qualified hitters this season. Fly balls become hits much less often than grounders or line drives, so it would make sense that his BABIP would drop. In fact, FanGraphs’ Andrew Perpetua calculates an expected BABIP based on a player’s exit velocities and launch angles, and Espinosa’s is a paltry .252.

But the flip side of that fly ball tendency is a bunch of home runs. Espinosa’s .221 isolated power is his highest since he played 28 games in his rookie season of 2010, and his 18 homers are already three away from a career best. But his home run/fly ball rate is 20.7%, far beyond his career 14.1% rate. He should fall back to earth in the second half, eating away at his power numbers, but his increased fly ball rate will still help him rack up home runs.

Espinosa is a different hitter than he has been in the past, but the hitter he has become still has his warts. He has become an above-average hitter on the strength of hit-by-pitches and home runs, neither of which seem easy to maintain. But even if those fall back to earth, he could still be a solid hitter and above-average regular. Espinosa has made some meaningful changes, but the end result won’t be too much different from his 2015 stats. For those who herald the arrival of #TDER, you may want to pump the brakes just a bit.