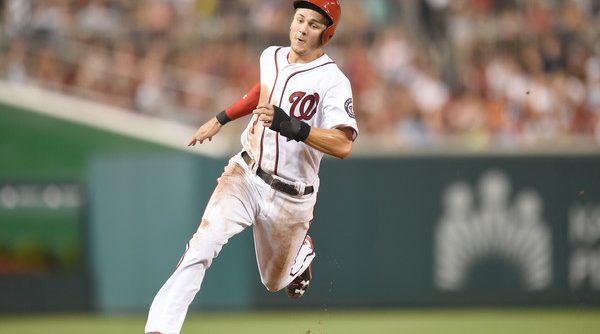 Trea Turner notched his third consecutive multi-hit game Sunday, knocking a single and a double in five at-bats. A pair of hits is practically mundane for him, as he has shredded expectations with a .319/.347/.540 line this season. Though he was a highly touted prospect, his 133 wRC+ while learning center field on the fly is jaw-dropping. How has the young shortstop-turned-second-baseman-turned-outfielder become so good, so fast?

First, some background. In May, I explored Turner’s interesting offensive profile: He runs an incredibly high batting average on balls in play, allowing him to have high batting averages despite more strikeouts than you’d expect. But given the seeming scarcity of players with extremely high BABIPs, I expected that his gaudy numbers would fall at baseball’s highest level.

In the article, I noted that the projection systems differed on how Turner’s bat would look in Washington. FanGraphs’ Steamer system pegged him for a .353 BABIP and a .285/.332/.402 line, which I identified as his “high case” offensively. But he has surged past those numbers in the majors on the strength of a .379 BABIP, a skill of his that has translated much better than I would have imagined (so far).

Thanks to that high BABIP, he has succeeded on a very similar profile to the one he had at Triple-A: He strikes out a decent amount (19.5 percent of the time), but his sky-high BABIP fuels an excellent overall line. He has departed significantly from his Triple-A offensive line with walks (far fewer) and isolated power (much more), but I would be surprised if either difference persisted long.

The decline in walks may be attributable to an aggressive hitter finding success with a free-swinging approach. It would make sense for them to return as he grows more comfortable in the majors and learns to work counts better. The apparent power boost is a different story, and I believe it comes from an outsized number of triples. He has five doubles and five triples in the majors this season, a ratio that is far out of whack given that he had 22 doubles and just eight triples in Syracuse this year. Turner has had a bit of good fortune that some of those balls end up with him on third, but look for them to start turning back into doubles soon.

If his walks and power return to their Triple-A levels, Turner’s offensive output should actually improve: He had an OBP of .370 and a slugging percentage of .471 at Syracuse, good for a 142 wRC+. But those numbers depend on Turner’s high BABIP, and his ability to keep that going forward could be intertwined with his strikeout rate.

As I discussed in my Turner article in May, Turner’s BABIP is no fluke. Players with similar minor-league BABIP abilities are stellar hitters like Mike Trout and Kris Bryant. It’s no mirage created by his speed, as evidenced by how Turner far outpaces fellow speedsters Billy Hamilton and Dee Gordon. And now that we have a decent amount of major league data on Turner, we can confirm that he simply hits the ball hard. Turner’s 41.2 percent hard-hit rate is elite, as it would rank 14th of 158 hitters in baseball if he qualified for the batting title. That’s on par with stars like Bryant, Trout, and Josh Donaldson. It’s no guarantor of success, as it’s very close to average hitters like Yasmany Tomas and Chris Carter. But Turner’s expected BABIP, according to FanGraphs’ Andrew Perpetua, is a healthy .365 compared to .301 for Tomas, seemingly reinforcing the idea that Turner can hit the ball hard and get hits more consistently than most.

But something interesting has happened to Turner’s BABIP and strikeout numbers over the past few weeks. Since July 27th (arbitrary endpoint, I know), Turner’s BABIP is .356, or somewhat lower than it has been the rest of the season. And in that same span, Turner has struck out a shockingly low 11 percent of the time.

As an important preface, I am referring to a span of 72 plate appearances. This is much too small a sample to draw conclusions about almost any stat, especially BABIP, but I believe the numbers in this span are illustrative of a trend Turner may be experiencing.

For the season as a whole, Turner’s strikeout problems seem to stem from swings and misses outside of the zone. His 32.4 percent O-Swing rate, or percentage of pitches outside of the zone he swings at, is roughly average. But his O-Contact rate, or percentage of those swings he makes contact on, has been an abysmal 47.6 percent, which would be sixth-worst among qualified hitters. And that is his lone problem, as his 91.1 percent contact rate on swings at pitches in the zone would rank in the top quarter of qualified batters. So to cut down on strikeouts, Turner must do a better job of making contact on pitches outside of the zone.

As part of his recent drastic drop in strikeouts, it seems Turner has done just that. Over the past two weeks, Turner’s O-Contact percentage has jumped all the way to 57.1 percent. While that would still rank in the bottom quarter of qualified batters, Turner’s Z-Contact rate has also been a stunning 100 percent during these two weeks, pulling his total swinging strike rate to a better-than-average 7.9 percent. The only other players to make contact on all their swings at in-the-zone pitches in that span are noted contact artists DJ LeMahieu, Jose Iglesias, and Robinson Cano.

Given the small sample size here, it’s important not to focus on the specific numbers here, but the logic of the central idea. When Turner makes contact on pitches out of the zone, it follows logically that the contact he makes on those pitches is weaker, lowering his BABIP. But the tradeoff is that he strikes out much less, improving his overall batting line.

If Turner can cut down on his strikeouts, he will have a much easier time keeping up his high batting average and excellent overall offensive output, given how rare extremely high BABIPs are. Whether he can do that remains a question, but it should be very encouraging that he has made so much more contact over a not-insignificant amount of time. Either way, Turner has demonstrated the ability to make hard contact and succeed while striking out. But the difference between him being a good hitter and a great hitter will be whether he can make more contact without sacrificing how hard that contact is.

Turner’s offensive output to date has been incredible, on par with great hitters like Carlos Gonzalez and Mookie Betts. It seems impossible that he can continue to hit like one of the three or four best offensive shortstops in baseball, but Turner has defied expectations and demonstrated improvement at every turn. If his contact gains are real, he could well establish himself as an offensive force for years to come.