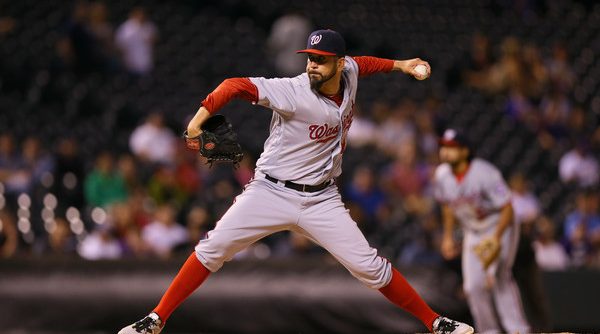 No jinx, but the Nationals are inching closer to officially locking up a playoff spot. The sizable lead the team owns in the NL East allows the Nationals to be smart about playing time down the stretch. Joe Ross needs time to build up arm strength? Let him get as many rehab starts as possible. Stephen Strasburg isn’t 100%? Skip one more start just to be safe. The relief pitchers, though, still have something to play for: a spot on the playoff roster.

The number changes almost daily thanks to September call ups, but as of this writing the Nationals have 22 pitchers on the active big league roster. The team will likely enter October with 11 pitchers on the playoff roster. Max Scherzer, Strasburg, and Tanner Roark have the top three starting slots locked down and Gio Gonzalez, despite a rough outing against the Braves, likely has the fourth. That leaves seven roster spots to be selected out of the remaining 18 pitchers on the current roster. Some roster spots are obvious, others not so much. Let’s rank who is most likely to make the playoff roster out of the bullpen:

Mark Melancon: Mike Rizzo’s big deadline move netted the Nationals their new closer, so Melancon is going to be the Nationals’ closer in October. That’s not to say he hasn’t earned it over his short stint as a National. Melancon’s the proud owner of a 1.72 ERA as a Nat with over eight strikeouts per nine and a groundball rate over 65%. Keep in mind that those numbers include his terrible outing against the Braves where he gave up four hits and allowed two runs. Ignore that game and his ERA drops down to a minuscule 0.61. Plus, Nats Twitter doesn’t lose its collective mind when he comes into a close ball game. He’s a lock.

Shawn Kelley: The guy who would have been closer, Shawn Kelley has put up a solid year out of the bullpen. His K/9 is over 13 and his BB/9 is only 1.7. He’s got a 3.21 ERA and only 2 blown saves. Dusty Baker has used him in all sorts of situations and he’s mostly thrived in high leverage situations late in the game. His spot on the playoff roster is not in doubt.

Marc Rzepczynski: I still can’t spell his name, but better start learning because Rzepczynski is going to be a key piece of the Nats bullpen. Thought he’s only been a National for a short time, Dusty Baker has already given him the ball in late inning situations. In the playoffs, he’s probably best suited as a LOOGY, coming in to shut down the opponents best hitting left handed hitters like Anthony Rizzo, Corey Seager, Adrian Gonzalez or Brandon Belt. Rizzo knew he needed a quality left handed reliever for the playoffs and Rzepczynski is here to fill that role.

Blake Treinen: Treinen had a bad rep among Nationals fans, thanks his struggles in previous seasons and in big situations. But let’s not relive those bad memories, because Treinen has quietly become one of the most reliable arms in the bullpen in 2016. He’s got a 2.94 ERA, he’s striking out over 23% of the batters he faces and forcing groundballs 66% of the time. He’s still had some struggles facing left-handed hitters, although it’s a much smaller split than previous years, and he still walks more batters than ideal, but at worst he’s a shut down ROOGY who Dusty can call on when he needs someone to throw a double play ball in a big situation.

Can’t Keep Him Off

Matt Belisle: Belisle was the forgotten man in the bullpen for most of the year. He hit the DL after only seven appearances in April and didn’t make another appearance for the Nationals until mid-June. All he’s done since then, though, is dominate. He has a 2.03 ERA coming into Tuesday night’s game. He’s also proven to be a versatile option for Baker, coming in to face single batters in key situations and handling multiple innings as a middle reliever as well. Those talents are very useful come playoff time and so it’s nearly guaranteed that Belisle will be in the bullpen come playoff time.

Koda Glover: The rookie hasn’t spent a ton of time with the big-league squad, but he’s already earned Dusty’s trust, getting handed the ball in big situations from the Nationals’ skipper famed for relying heavily on veterans at the expense of youngsters. His stuff is obviously big-league caliber and he’s been effective at getting both right handed and left handed hitters out over the course of his minor league career. “Playoff experience” is overrated, so don’t be surprised when this rookie makes the playoff roster.

Comes Down to Health

Joe Ross: Ross has spent much longer on the DL than anyone anticipated. He’s finally on track and making rehab starts, but the team has its doubts that Ross can build up the arm strength in time to be a full time starter come playoff time. If he can work his way back to 100% before October, the Nationals will have a tough decision. They could use Ross as a starter, knowing he will be limited to only a handful of innings. They could also deploy him out the bullpen where his sinker/slider combo can play up in either quick appearances or longer outings. Everything seems to be going well for Ross on this rehab stint and it would be hard to keep him off of the roster if he’s good to go.

Sammy Solis: Solis is also having to work his way back from injury. If he’s back and healthy, he’s the Nationals best or second best left handed reliever and that makes him valuable. He has a 2.35 ERA on the year, but he’s been better than just a LOOGY. He’s allowed only a .250 wOBA to lefties but has also been tough on righties, limiting them to a .297 wOBA. If he can rehab in time for the playoffs, expect to see Sammy on the mound, dropping hammers.

Need to Earn It

Oliver Perez: Brought in to be the Nationals’ LOOGY this season, Perez has disappointed. He has a 5.50 ERA that is worse than his FIP, but a 4.49 FIP isn’t anything to write home about either. Worst of all, he’s allowed a .331 wOBA to left handers, making him a left handed specialist who can’t get lefties out. Despite that, Dusty has kept handing him the ball — 57 times so far this season. The team likely doesn’t need a third lefty on the roster so the only way Perez could make the squad is if Solis can’t return. Even if Solis doesn’t get healthy, Perez hasn’t earned a playoff spot with his play so far in 2016. He will have to prove he deserves it over the last month of the season.

Yusmeiro Petit: Petit is in a similar boat with Perez. His signing made a lot sense at the start of the season and he has shown why he could be useful, eating innings as a mop up guy or coming in for extra inning games. His ERA is only 3.99 but his FIP of 4.72 does a better job of showing what kind of pitcher Petit has been. He’s been even worse of late, with a 9.24 ERA over his last 12 innings going back to the end of July. If Ross is healthy, he can take over Petit’s long man role and likely do a better job of it than Petit has recently. Of course, Petit has one month to turn things around and earn his spot.

On the Outside Looking In

Lucas Giolito, Reynaldo Lopez: The Nats’ two young prospects get grouped together here because their situations are nearly identical. They have posted similar, slightly disappointing numbers as starters in their handful of chances in the big leagues but flashed the tools that made them elite prospects in the first place. They haven’t pitched well enough to knock Gonzalez out of the starting rotation but it’s not hard to picture one them taking after a young, Rays-era David Price and being useful out of the bullpen. Given the other options the Nationals have, it seems unlikely that the Nationals would take a chance on a rookie in a new role in the playoffs unless their hand was forced.

Sean Burnett: Former and now current National Sean Burnett is back wearing a curly-W and has gotten a couple chances on the big league squad thanks to expanded September rosters. However, his chances of a playoff spot are slim despite his serviceable numbers on the season. He’s probably number four on the depth chart of left handed relievers, but he’s got a shot at a spot if he can outperform Perez down the stretch and Solis can’t answer the call due to his shoulder pain.

Just Along for the Ride

AJ Cole, Trevor Gott, Matt Grace, Mat Latos, Rafael Martin: These guys aren’t are all in the same boat. Some are on the roster to make a spot start or two (Cole and Latos) while some are here to help fill innings out of the bullpen (Gott, Grace, Martin). Some are in the majors as a reward for hard work in the minors (Grace, Gott) while others are insurance against a devastating injury (Latos). Regardless of individual situation, it would take something drastic to create a need on the playoff roster for any of these guys.