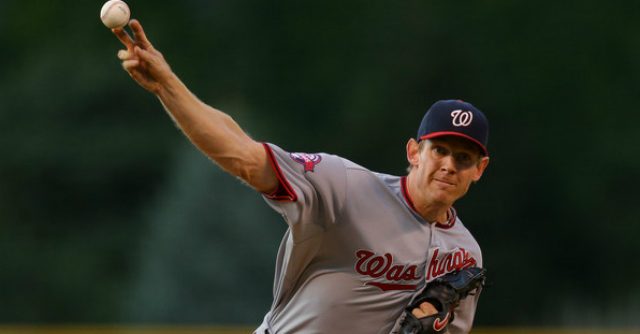 Stephen Strasburg had unreasonable expectations placed upon him from the moment he reached the big league level. He was a number one overall pick with a triple-digit fastball, a disgusting curveball that caused MLB regulars to buckle their knees, and a changeup that dove hard in on righties. He was the first true hope that the Nationals saw enter their organization since Ryan Zimmerman was drafted in 2005.

For all of those expectations, Strasburg managed to exceed them in in his debut on June 8, 2010. That still may be the most exciting baseball game I have ever attended. I was at Max Scherzer’s first no-hitter in 2015. I was there when the Nationals clinched their first NL East title. I was at the infamous Game Five in 2012, and I was at the 18-inning marathon against the Giants in 2014. (Despite their results, those games were spectacles.)

The first hurdle of Strasburg’s career happened less than three months into it. He’d blown his ulnar collateral ligament. The beginning of a career with so much promise was put on hold for a year just after it started. It seemed cruel to be teased with such potential and not knowing what was going to happen the other side of it, both for Nats fans and for Strasburg himself.

What have they gotten from Strasburg since his return from Tommy John surgery in 2011? Just the best pitcher in team history. Strasburg has a career 3.17 ERA and 2.86 FIP, and he has been the most valuable pitcher (22.5 fWAR) in team history with more than 900 innings on the mound wearing the Curly W.

There have been questions and controversies surrounding Strasburg as soon as he was first diagnosed with a torn UCL in 2010. Maybe he was rushed to the big leagues, some posited. When he came back for his first full season in 2012, he was shut down before the regular season ended, just as the original plan had dictated. It didn’t matter that the Nationals were about to make their first postseason in team history. The controversy surrounding this still lingers.

Yet when Strasburg signed a huge extension earlier this year to stay in DC, he actually cited the team’s ability to take care of his health as a reason he stuck around. He saw it as a reason to stay with the team that drafted him rather than go home to the west coast. That’s how important it was to him.

It seems cruel and unusual, then, that Strasburg could seemingly endure another injury to his right arm on Wednesday night. The player and his team took unprecedented precautions to preserve his health. The team invested $175 million in that arm this spring, trusting that the process would take care of their huge investment. The value of that investment is now in question, along with the prospect of the team’s October success.

And as bad as we feel as fans right now, it’s hard to imagine how Strasburg himself feels in this moment. A player who has worked so hard to get to this point, a player with seemingly endless potential, is now unable to do the thing he has worked his entire life to do. It’s easy to get caught up in how we feel as fans and what it means for the future, near and far, but there’s a person behind this injury. And that person has been here before.

So, what was the point in all this?

Since 2010, Stephen Strasburg’s starts have been must-watch events to me. From the spectacle of his debut to the stretches it seemed he couldn’t get out of the first inning without a meltdown, Strasburg has been my favorite pitcher. He may be my favorite baseball player. When he takes the mound and is healthy, I think he’s the among the most electric and exciting pitchers in the sport. There is no pitcher I would rather watch pitch than him. The thought he could be hurt yet again is crushing to me.