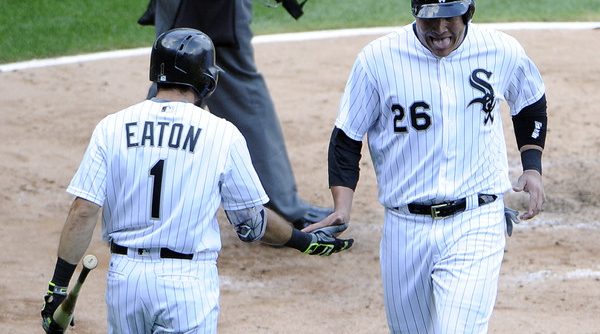 In Eaton, the Nationals acquired a vastly underrated outfielder to plug into centerfield. Eaton is a stellar hitter, hitting at least 15% better than the league each of the last three years. He hits for average, knows how to take a walk, and has double digit home-run power to boot. He’s a plus baserunner, meaning he can swipe a bag but also excels at going first to third. He will likely slot into the top third of the Nationals lineup, setting the table for Daniel Murphy and Bryce Harper.

The stat you have by now surely seen bandied about is Eaton’s 6 Wins Above Replacement (WAR) last season. That’s an MVP level WAR. It’s a WAR score that Andrew McCutchen hasn’t topped since 2014. But that number is a little misleading. Eaton’s stellar defense in right field contributed a significant amount of value last year to that 6 WAR. His defense has not translated as well to centerfield in the past, however, meaning that WAR would likely have been lower had he played a full year of centerfield. Defense remains incredibly difficult to gauge and represents the last on field frontier for analytics, and outfield defense especially so. By advanced metrics, Eaton hasn’t rated well as a centerfielder. But he has also been playing next to some subpar defenders, so it’s hard to pin the blame totally on Eaton. Eaton won’t win a Gold Glove in center for the Nationals, but he he’s no Adam Dunn either.

Of course, Eaton is not the White Sox player that Nationals’ fans thought they would be getting this week. Had the Red Sox not swooped in, the Nationals would have (supposedly) traded for Chris Sale at the cost of a similar prospect package headlined by Giolito and Lopez, plus super outfield prospect Victor Robles. Before freaking out on twitter about the Eaton deal, Nats’ fans spent 24 hours lamenting Mike Rizzo’s inability to close the Sale deal. Dropping Eaton onto the 2017 Nationals’ roster likely makes a bigger impact than putting Sale into the 2017 rotation.

Eaton ostensibly replaces Danny Espinosa, who loses his starting job with Trea Turner’s shift back to his natural shortstop position. Espinosa is projected to be a roughly replacement level player next year, good for less than 1 WAR. If we take Eaton’s last 3 offensive years, which have been incredibly consistent, and assume he is an average defensive centerfielder, he projects to be a 4 WAR player. That’s over a 3 win upgrade in going from Espinosa to Eaton, not to mention the upgrade from having a full season of Turner at shortstop. Had the Nationals acquired Sale, he would likely have taken Gio Gonzalez’s spot in the rotation. Gio, in a down year, was good for 3 WAR. Sale, on the other hand, put up a 5 WAR season, a 2 win difference between the two. The math favors Eaton. Adding Sale would also have been reinforcing a strength, as the Nationals rotation is set for the long term with Max Scherzer and Stephen Strasburg signed to long term deals with Tanner Roark and Joe Ross early in their big league careers. On top of that, Sale would reportedly have cost the same package plus prospect Victor Robles. Sale is one of the top pitchers in baseball, sure, but it’s not obvious that he would have improved the Nationals as much or more than Eaton does.

Part of the appeal of Eaton, and the reason he came at such a steep price, is the size of his contract. For a player coming off of a 6 WAR season, Eaton is making peanuts. He is signed for the next three years for only $18 million and the Nationals hold options to extend that to five years for $38 million. For comparison, Jason Heyward just last season signed an 8 year, $184 million contract and has been relegated to motivational speaker on the Cubs postseason run. Eaton may not have been able to earn that big of a contract in free agency, but he could easily fetch a contract north of $100 million if he were to hit the market this offseason. The Nationals are getting over $70 million in surplus value on Eaton’s contract.

As mentioned, the Nationals had to pay a price for that surplus. Giolito is among the top 10 prospects in baseball and Lopez is not too far behind, while Dunning is fresh off of a solid college career at Florida and being picked in the first round of the MLB Amateur draft this past summer. In a worst-case scenario for the Nationals, all three pitchers end up being long term mainstays in the White Sox rotation. That is, of course, assuming the rosiest outlook for each prospect comes to fruition. When it comes to prospects, meeting sky high expectations is the exception, not the norm. It’s just as easy to look at this collection of pitching prospects and see their downsides. Giolito has already had Tommy John surgery once and his stuff has not looked as good over the last 12 months as it did before the surgery. He has struggled to overpower minor league hitters and looked below average when facing major league hitters. As for Lopez, while his pure stuff dazzled in the big leagues, he still had a 4.91 ERA in his 44 big league innings. On top of that, his body type and mechanics could destine him to a bullpen role in short order. Finally, Dunning is only a year removed from college and hasn’t proved much of anything as a professional.

Analysts love to say that baseball is a “copycat” league. Front offices look at the team that just won the World Series and try to emulate their approach. No front office in recent history has had as much acclaim as the Cubs front office, and it paid off in a World Series title. In getting to that title, Theo Epstein and company built a winner by holding on dearly to position player prospects and trading away top pitching prospects. That’s how they ended up trading away Andrew Cashner to get Anthony Rizzo and why they refused to trade Kyle Schwarber or Kris Bryant or Javier Baez or Addison Russell even when it looked like some of them would be blocked at the big league level. The Cubs looked at the baseball landscape and decided that pitching prospects were overrated and that loading up on position player talent was the way to go. In the Eaton trade, the Nationals leveraged their abundance of pitching prospects to acquire a quality everyday player while holding onto their highly regarded position player prospects. Though the Nationals’ system is now down three pitching prospects, Erick Fedde, Austin Voth and AJ Cole remain in the system as nearly major league ready starters while arms like Jesus Lazardo and Joan Baez continue to work their way up the minors. Meanwhile, Robles, Carter Kieboom, Sheldon Neuse, Drew Ward and Andrew Stevenson will continue to wear the Curly-W.

Getting a quality centerfielder was always going to be expensive, whether that player came via trade or free agent signing. While Rizzo’s hands may be tied when it comes to budget, he has spent year building a quality farm system to allow him to make exactly these kind of deals. The Nationals are a better team today than they were yesterday thanks to the addition of Eaton. And there is still plenty of time left in this offseason for Rizzo to pull off another crazy move (here’s looking at you, Alex Colome).