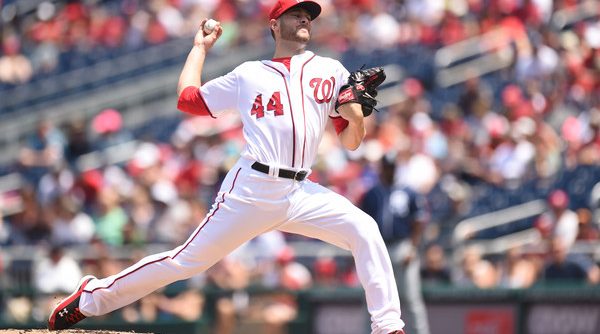 If there is ever an example of a team committing to a hard choice, it is the Washington Nationals in their recent trade with the Chicago White Sox.

That deal, which sent right-handed pitching prospects Lucas Giolito, Reynaldo Lopez, and Dane Dunning to Chicago for outfielder Adam Eaton, comes with potentially serious implications. Eaton makes the Nationals better in 2017 in beyond, as he can immediately be inserted at the top of the order and play centerfield every day. Many have correctly noted that Eaton’s defensive numbers do not come out as strong in centerfield as they do in right field — which is where he spent his 2016 campaign — but his overall production should still top the Nationals’ other options.

What the Nationals sent to Chicago, however, is a package of young players with high upside, some of whom the club once seemed destined to build around in the future. Giolito fits this case, as he is still regarded as a potential ace and stands out among the top pitching prospects in baseball, despite his ups and downs last year. For the record, he would have topped my Top-10 prospect list for the Nationals in 2017 if not for the trade.

Lopez seems destined to be a contributor at the major league level, be it as a reliever or starter. Dunning is the least known commodity of the trio, but the 2016 first-round pick was a likely organizational Top-10 prospect and a name to watching going into 2017.

While that is a high price to pay, the Nationals had to consider the future. As my colleague Andrew Flax recently pointed out on Twitter, the starting rotation is an where the Nationals face limited uncertainty going forward:

Injuries are sure to muddy the waters and the core of starters in place now could change over time, but clearly the Nationals have their options lined up when it comes to future rotations. The outfield, however, presents far more uncertainty, to the point where it made sense to part with Giolito and Lopez rather than Victor Robles, the coveted centerfielder who now assumes the mantle of the organization’s best prospect.

Robles ended last season at High-A, where he will likely to return to start 2017. Best-case scenario, he probably does not reach the majors until 2018 and may not even enter the picture full-time until 2019.

Yet on that schedule he remains key to the Nationals, who are entering a point of transition in their outfield. Jayson Werth is a free agent after the 2017 season, which is likely to be his last in Washington. Bryce Harper will hit the market after the 2018 season and, even if he does not shatter records for free agent contracts as many have predicted he will, the Nationals will have their share of competition to retain his services.

At that point, the young and athletic Robles may be ready to emerge as the team’s next homegrown star. While Eaton is under team control for the next five seasons, he could always slide over to right for Robles, who has the upside to play center field at a high level defensively.

Right now, that is an easy forecast to make. If the Nationals find that Robles will not match his hype, or are enticed enough to move him in a trade — as they reportedly were for Chris Sale — then that picture could change. But for a team whose outfield depth at the major league level is going to thin out over the next few seasons, the long view suggests that it is a good idea to keep Robles around — even if the alternative is a high price to pay.