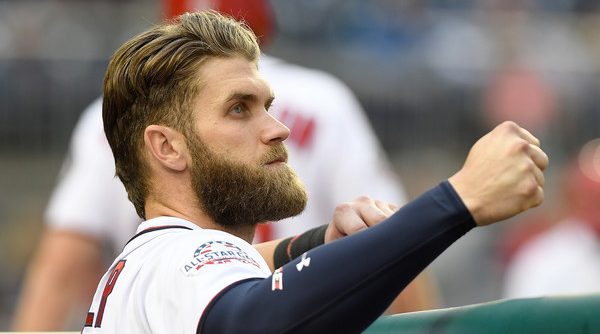 The difference with Bryce Harper Field is the one no one wants to talk about. Bryce might not be a Washington National much longer, regardless of how upset I get whenever anyone reminds me of that fact. But knowing that even if he leaves us for a new city and franchise, kids will be able to nurture their passion for baseball on a field that bears his name makes me feel a little bit better.

Happy to be a part of the dedication of Bryce Harper Field this morning. Thank you to everyone who came out and those who made it a reality ✂️👏🏼⚾️ pic.twitter.com/Cg3epvwneW

I only gained an awareness of the Nationals as I got older and as the team gained more stars: Strasburg on the mound, and Harper at right field. I was a teenager when the Nats started getting really good, and their stars became household names in Washington. I wasn’t a very athletic kid. My relationship with baseball began with the Boston Red Sox and their ‘04 and ‘07 championship wins. I remember watching the game with my fifth-grade classmates in silence at a Halloween party, eyes glued to the screen, afraid that any noise or movement would cost them the game.

I wish I’d been a young kid, instead, and that my formative memories of baseball were of Zimmerman, Desmond, Scherzer, and Harper. I certainly wish I’d joined my brother on a little league team and learned to play the sport as a child, rather than a brief stint on the softball team in eighth grade (I was a slugger, but I couldn’t throw to save my life).

I can’t turn back time, but I can be grateful that the kids at Takoma Park get to learn about baseball on Bryce Harper field, and have a player with such skill and passion to look up to. Harper has already given our city an incredible gift by playing here. Last Saturday, he gave us another. I can only hope that he’ll be here long enough to catch some games at his field.