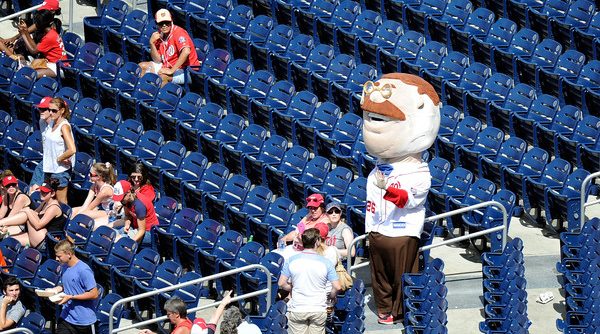 When your baseball team is having a worse than usual season there is one thing that keeps baseball fans going: Giveaways. Giveaways basically ensure that some people will go catch a baseball game if the giveaway is good enough or funny enough. The Washington Nationals have had a giveaway gold in years past. Great gifts of the past years have included things like the Jayson Werth Garden Gnome, the Trea Turner Sliding Bobblehead, and the Michael A Taylor Mr. Potato Head. There are also a few giveaways coming up that are worth noting like a Trucker Cap, a Nationals Zip Up Hoodie, and an Oktoberfest Stein. Regardless, out of all of these giveaways, there is one that rises above the rest: The MASN Hawaiian Shirt.

Like most Hawaiian shirts it is not conventionally stylish or cute, but it sure does display some Natitude. The shirt is vibrantly red and covered in white Curly W’s and baseballs. To top it off the shirts don’t seem to fit anyone properly, propelling it into another level of ridiculous hilarity. These Hawaiian shirts really exemplify everything that a giveaway should be: funny, ridiculous, but a fun way to show your love for a team you adore. It’s hard to tell if people ironically love them or just sincerely do. Currently, medium, large, and extra-large shirts are going for around $30 on eBay. The small is trending at around $40 – $50. People desperate to get their hands on a shirt have been going to Reddit in search of a trade, usually being willing to trade a bobblehead for the shirt.

While the shirt itself is amazing, it also made for great game time entertainment. During The Presidents Race, the presidents donned their best Hawaiian shirts as they raced, where Teddy inevitably lost. There was also something funny about watching an entire crowd wear the same hilarious Hawaiian shirt. What really made me laugh was seeing Johnny Holliday and F.P. Santangelo wearing the shirts the entirety of the broadcast. These shirts really might have something magical in them as we are one for one on nights the crowd is wearing them and zero for two on nights they’re not.