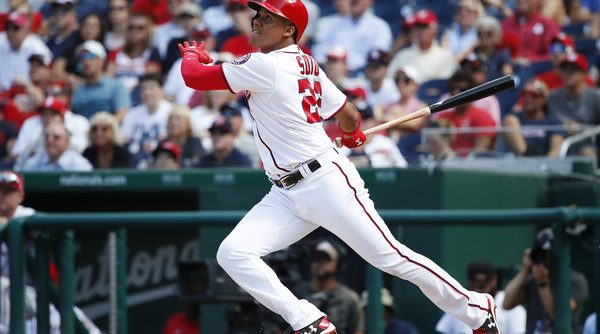 The trades of Daniel Murphy and Matt Adams were not a “fire sale,” a term that was thrown around by numerous members of the media as the Nationals offloaded the two sluggers playing on expiring contracts this past week. Was it a tacit admission that the competitive portion of 2018 had ended for the club? Absolutely. But a fire sale? Far from it.

Look at what the nearby Baltimore Orioles did at the most recent trade deadline. Or, look within the division at the Miami Marlins, who rid themselves of a bevy of talent in Giancarlo Stanton, Christian Yelich, Marcell Ozuna and Dee Gordon this past offseason. Those were fire sales. The Nationals simply moved on from two players that they were not going to dedicate more financial resources to after 2018. One could easily argue that even if this Nats season hadn’t turned into a tire fire, both Murphy and Adams would be looking for new teams this coming winter.

General Manager Mike Rizzo balked at talk of the Nationals’ window closing in his press conference announcing the trades, and from this writer’s point of view, he was 100% right to do so. The elephant in the room is obviously Bryce Harper and his impending free agency, a topic I would imagine every Nationals fan is growing tired of at this point. However, even if you strip Harper from next year’s roster, the Nats will have, at the very least, a club that can contend for a wild card spot.

It’s not rebuilding time for this organization. It’s re-tooling time.

Of course, we’re all used to preseason predictions of division titles and postseason glory (so much for the latter). I highly doubt that will be the case when spring training for the 2019 season begins. But have a gander at what the Nationals could field next season without making a single move this coming offseason. This includes not re-signing any of their free agents.

Yes, question marks abound, and that’s not even a full roster (but it’s close). Who knows how Joe Ross will perform after Tommy John surgery and an extensive recovery period? Who knows what Eric Fedde is capable of becoming at the big-league level? Is Spencer Kieboom just another Pedro Severino? What would Wilmer Difo’s batting line look like over 150 games (and we may never find out)? Will Carter Kieboom be ready to contribute? Is Tanner Roark the guy we’ve seen since the 2018 All-Star break or the guy we saw before it? What are we going to get from Stephen Strasburg on his mammoth contract, after what has been a disastrous 2018? Can Sean Doolittle stay healthy? Can anyone in that bullpen emerge as a truly dominant reliever?

But even with all those ponderings, an outfield of Soto, Robles and Eaton has high upside and is cheap as hell, as Barry Svrluga of The Washington Post pointed out. Trea Turner has put up a 3.5 WAR season in 2018 while being barely average at the plate – imagine if he improves that facet of his game, a definite possibility. Anthony Rendon remains the most underrated player in baseball. Ryan Zimmerman has shown that, when healthy, he is still a power threat. Difo displays tremendous range at second base, can occasionally drive the baseball and is fleet of foot on the basepaths, while Kieboom has drawn raves at the minor-league level. Max Scherzer is Max Scherzer.

Although many of us Nats fans saw the door slamming shut after 2018, assuming Harper would be leaving town, the truth of the matter is this: Rizzo has not only built competent baseball teams, but a competent organization that has shown a willingness to spend money in order to field a competitive product year-after-year. Hell, this fact (plus a lot of money) could motivate Harper to become a Nat for life. But at the very least, we should all recognize that this organization is not going to simply kick rocks and hope for the best with the roster I laid out above. No, they haven’t turned every prospect into a star, but no team does. And our resident prospect expert (and hugger) at The Nats Blog, Andrew Flax, says the industry views the Nats’ farm system as average at least, with a knack for developing hitters. So we got that going for us.

Although this week feels like a serious downer after the departures of Murphy and Adams, just remind yourself that at least half of the teams in Major League Baseball would still kill to be in the position the Nats are in moving forward. And who knows – perhaps the taming of preseason expectations will cause this club to soar.

As for the front office’s decisions regarding the club’s skipper…..well, let’s save that for another time.