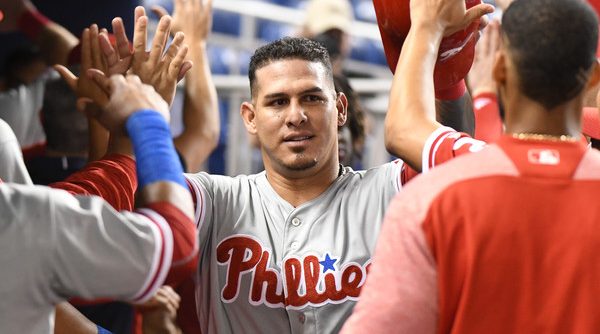 In my previous post, which addressed the Nationals’ outlook for 2019, I quickly threw out 14 free agent options for positions that look to be roster weaknesses heading into next year. Due to the many intriguing names available, I figured the next logical step was assessing these potential fits and what they could bring to the table.

The approach that Washington takes in free agency entirely depends on whether Bryce Harper is re-signed to a mammoth contract or not. The market also produced some strange results last offseason, so I did not do much salary projection below. This is simply a fun bit of daydreaming on the kind of talent Mike Rizzo could bring in to re-tool the team for another postseason run.

Yasmani Grandal
Grandal has been one of the best catchers in baseball over the last five years. FanGraphs has him fifth in total WAR over that time frame. The switch-hitting catcher is 29 and he’s stayed (mostly) healthy throughout his time in Los Angeles, where he’s never had an OPS+ lower than last year’s 100 – this year, he’s at 119. Sturdy behind the plate, solid pitch-framer, good hitter. The Dodgers have deep pockets, but they also have Austin Barnes, who showed flashes of greatness last season.

Wilson Ramos
What a joy it would be to welcome The Buffalo back to DC. I probably don’t need to go deep into the particulars on Ramos, as he was playing in the District just two years ago. His production at the plate since departing has been similar to what it was in 2016, when he was an All-Star for the Nats. Obviously, the biggest concern for WIIIIIILSOOOOON is….his health. He’s spent many, many days on the disabled list over the course of his career, certainly worth noting when it comes to the catcher position.

DJ LeMahieu
Rockies Player Alert. I never know what to truly think of any Colorado hitter besides Nolan Arenado, as we’re always told how warped their stats are due to the Coors Field Factor. The longtime Rockies second baseman doesn’t have impressive power numbers even through he’s played half his games at the most hitter-friendly park in baseball, but he does have a career .351 OBP and defensive metrics like him. He’s probably better than 150 games of Wilmer Difo, is what I’m saying here.

Brian Dozier
Dozier was at the forefront of the power-hitting-second-basemen revolution, peaking with 42 home runs in 2016. His numbers have declined in 2018, as his age-31 season has featured a 90 OPS+ after he ran a 120 from 2014-17. However, he’s still popped 20+ home runs and 25+ doubles while playing acceptable defense. I would imagine Dozier will cost a bit more than LeMahieu due to the slugging numbers he’s put up.

Dallas Keuchel
Keuchel was incredible in 2015, as he ran a 2.48 ERA across 232 innings and earned the American League Cy Young award in the process. He’s battled some injuries and inconsistency since then, but has still maintained solid peripherals and will eclipse 30 starts in 2018. Throw in a 3.24 ERA in 7 postseason starts and….well, Keuchel is probably going to demand quite a bit of dough this offseason. I’m not sure he’s worth a mega-deal, but the Nats may check in anyway, as the rotation could use a solid lefty after the departure of Gio Gonzalez (sniffs, dries eyes).

Charlie Morton
One imagines the Astros will attempt to re-sign one of Keuchel and Morton, especially with the production they’ve seen from both in 2018. Morton emerged from years of relative obscurity in Pittsburgh to become a key regular and postseason contributor for last year’s World Series champions, and he’s continued that success into this year, producing career-bests in ERA (3.15) and K/9 (10.78) with a masterful mix of a four-seam fastballs, curves and sinkers. However, Morton is 34, so who knows how much more mileage he has in his arm.

Clay Buchholz
Signing Buchholz to a short-term contract could lead to surplus value or could be equal to setting the cash on fire. The righty has never topped 189.1 IP in a season and has thrown less than 100 over the last two seasons combined (as of this writing). He’s run an outstanding 2.01 ERA this year in Arizona, but a 3.46 FIP indicates a number that low could be tough to maintain much longer. Injuries have always been a problem, but I could see Buchholz putting up solid, no. 3-4 starter production if he stays on the field.

Trevor Cahill
Cahill is another potential addition for the bottom of the rotation. A durable starter early in his career with the Athletics, even posting a 2.97 ERA and 18 wins in a 2010 campaign that saw him make the All-Star team, Cahill wandered the wilderness from 2012-17, getting bumped to the bullpen at several stops along the way. He’s rebounded with a 3.77 ERA in 19 starts for Oakland this year, with a 3.52 FIP to boot. Maybe he’s only good when he pitches for the A’s, I don’t know.

Nathan Eovaldi
Eovaldi has inspired excitement whenever he has a stellar run of starts, as the right-hander can touch 100 mph with his fastball. However, one look at his Baseball-Reference page and you can see he’s never really put it all together over a full season. How Eovaldi performs down the stretch and in the postseason for the Red Sox could have a large impact on the kind of offers the 28-year old gets on the market.

Craig Kimbrel
Kimbrel has been one of the best closers in the game for almost a decade now, making it hard to believe that he’s only 30 years old. Nats fans are very familiar with his powerful fastball-curveball combination. The righty has had struggles with control, but I’m not sure anyone would be complaining if Rizzo brought in Kimbrel and his 329 career saves (as of this writing). Imagine Sean Doolittle in the 8th and Kimbrel in the 9th. Whew.

Andrew Miller
Miler has pitched just 24 innings this year, battling an array of injuries, most recently a shoulder ailment. He’s set to return to the Indians this week, looking to propel Cleveland down the stretch and through a long postseason run. Miller’s value has certainly fallen since 2018 began, but there are still few relievers you’d rather face less than this 6’7”, 205-pound lefty with a killer slider.

Adam Ottavino
The Rockies have spent a boatload of money on relievers over the last couple of years, but this season’s bullpen MVP has been with the franchise since 2012. Ottavino has topped 60 IP for the first time since 2014 and is currently Rocking career-bests in ERA (1.93), FIP (2.37) and K/9 (12.99). With Wade Davis, Jake McGee and Bryan Shaw all struggling in 2018, Ottavino has saved Colorado’s bullpen, and they may not be able to afford him going forward.

David Robertson
The 33-year old Roberston was Mariano Rivera’s successor in New York for one year before signing with the White Sox in free agency to close games on the South Side. After a couple of up-and-down years there, the righty returned to the Yankees via trade in 2017 and has dominated ever since. He now has a slider to support his already lethal cutter-curveball mix. No worries of a platoon split, either: Robertson has held left-handed hitters to a lower average than righties this year (.157 to .185).

Zach Britton
This former Oriole has been plagued by injuries the last two seasons, falling from the elite tier of late-inning relievers. His tantalizing sinker has not been as effective as it was during his dominant run from 2014-16. There’s a chance Britton could be had for cheap this winter, a notion unimaginable just two years ago.