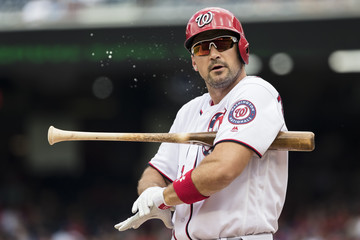 Anyone who is up to date on Washington baseball knows that Ryan Zimmerman has a few nicknames: Mr. National, Zim, and the most impressive Mr. Walk-Off. The Mr. Walk-Off nickname comes from, of course, Zimmerman’s knack for hitting walk-offs. This impressive talent has allowed Zimmerman to join the company of Babe Ruth, Mickey Mantle, and Stan Musial as one of the most prolific walk-off home run hitters for a single team of all time. He is also not far from tying Jim Thorne’s league record of walk-off home runs at 13. To some, this nickname sounds pompous, but it isn’t when you have the talent to back the nickname.

Since the MLB and MLBPA created Players’ Weekend in 2016, Zimmerman has used the nickname Zim on the back of his jersey. Zim is definitely the least interesting of his nicknames, but probably the most “acceptable” of them by baseball’s “respect the game” standards.

While Mr. National might be the best nickname, I’m most partial to Mr. Walk-Off gracing the back of his Players’ Weekend jersey. Zimmerman has shown that he deserves to wear the nickname Mr. Walk-Off simply based off of talent, and when you can do that, you take advantage of it. While some would argue that wearing Mr. Walk-Off would get him drilled on the first pitch thrown his way, I feel other players should respect a veteran who has 11 walk-off homers under his belt. If anyone has a problem with Zimmerman wearing Mr. Walk-Off on the back of his jersey, I would challenge them to hit 11 walk-off home runs while in the big leagues.