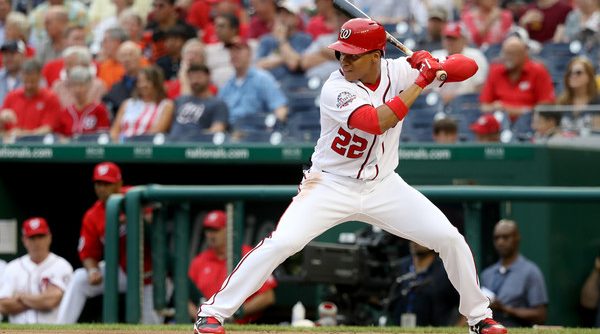 I once had the thought that maybe Juan Soto might get the short end of the stick and have to be sent back to the minors once everyone is healthy again and there’s not room for everyone.

Firstly, I’m convinced that the Nationals will never be fully healthy, and there will be at least a handful of people with the plague at all times. Secondly, you cannot take Soto off this team. He has been way too good. On a team starved for offensive production, you can’t take away one of the only players who is currently doing that for you. Especially with a couple key starters injured, offense is more important than ever.

At-bats and qualifiers aside, Soto trails only Adam Eaton for the team lead in average, currently hitting .344. In only 20 games, he’s smacked 5 home runs, has 12 RBI, has scored 14 runs, and he’s stolen a base. More impressively, he’s walked more than he has struck out (12 walks to 11 strikeouts). His on-base/slugging/OPS is .447/.641/1.088, all of which are very impressive, especially considering he is only nineteen years old.

Yes, he’s young, but Soto is the real deal. The Nationals are 13-8 since Soto’s debut, and they’ve gone from four games back of the division lead to a consistent yo-yo back and forth with the Braves for the lead. Soto makes the Nationals better, plain and simple. He’s getting hits when no one else can, and he’s getting them in big situations. He’s been a huge spark for the Nationals ever since his callup, and they need that youth and fire to carry them throughout the year.

In short, thank you to Mike Rizzo for protecting Soto with your life and not trading him away. We didn’t know he’d be up this early, but he’s been a revelation. And you can never send him down again. The Nationals cannot afford such a thing.The kid is playing out of his mind, and he’s proved that he belongs in the major leagues. Maybe improve on a little bit of fielding, and then he’s gonna be downright scary. The roster situation can be figured out later when that becomes necessary, but for now, let’s just enjoy the young offensive wonder that is Juan Soto.