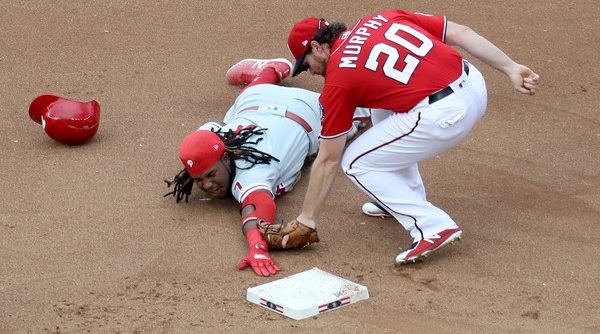 Daniel Murphy’s prolonged absence from the Nationals’ lineup, which thankfully concluded on June 12, was quite possibly the biggest reason for the team’s status as a sleeping giant. Yes, I realize the club sits well over .500 thanks to a 26-12 stretch after a 11-16 start, but the squad undeniably receives a super boost with the return of one of MLB’s finest sluggers – if that slugger can return to his 2016-17 form, a notion that is in doubt.

Murphy’s rehab could not be described as “smooth”. As late as last week, there were few signs of full recovery, as Murph labored to get to first base and on ground balls hit to him at second base. Now, the Nats, depleted by injuries since the season started, will take any version of Murphy that they can get. The offense has been far from consistent and the second baseman has been a driving force in any success that the lineup has had in his two previous years with the club. I’m just not sure we’re going to get THAT Daniel as he continues to recover from microfracture surgery on his right knee, a procedure that has been known to shorten careers (see: Grady Sizemore).

As you can notice by taking one look at Murphy’s swing, he generates a ton of power from his lower half. He was one of the first proponents of the launch angle revolution, diligently re-working his mechanics with then-Mets hitting coach Kevin Long, who did such a damn good job with his subject that the Nats made a point to hire him to perform the same job for their club this past offseason.

Let’s be clear: there was absolutely nothing wrong with the slap-hitting Murphy that existed before the 2015 postseason. From 2009-15 (note that Murph missed all of 2010 with a torn MCL in the same knee that needed surgery this past offseason), he hit .287/.328/.422, averaging 36 doubles, 10 home runs and just 69 strikeouts per season. Before the power-strewn era that we now live in, that was very solid production for an everyday second baseman in the majors.

Then, of course, that legendary postseason mash session happened, with Murphy crushing 7 home runs in just 38 bats combined in the NLDS and NLCS. The baseball world was unsure if the power surge was sustainable, so the Nats scooped up Murph on a reasonable 3-year, $37.5 million deal that the re-born hitter more than paid back in his first two seasons with the team.

However, 2018 stands as a gigantic question mark for no. 28. Will he be able to generate the same type of gap-splitting, bleacher-reaching power that he showcased in 2016 and ‘17, when his averages jumped to .334/.387/.569, 24 home runs and 98 RBIs, all while keeping essentially the same strikeout rate? Or will he return to being a singles hitter while providing subpar defense and baserunning, traits easily overlooked when he’s mashing homers but harder to swallow when the power’s not there?

Let’s consider the player’s fortunes as well. Murphy has to be frustrated, not only because of the surgery and his subsequent inability to play until the season is almost halfway through, but the effect that has on his offseason prospects. After last season’s incredibly slow free agent market, it became clear that any decline in a power hitter’s numbers can lead to a severe decline in contract length and compensation. Murphy is in his age-33 season, so how many teams will be lining up to pay a slow, aging second (or first, if he moves there out of choice or necessity) baseman with potentially dwindling power with two major knee injuries in his career? Will the Nats get him back on a bargain deal or will they shy away, with Wilmer Difo potentially ready to be an everyday player at second base and first base filled by either Ryan Zimmerman, Matt Adams or Mark Reynolds?

I want everything to work out swimmingly for Murphy. His energy and leadership don’t get quantified, but he’s undoubtedly helped the Nationals in the clubhouse and in the dugout. He is constantly thinking about and talking about hitting, a characteristic that seemed to rub off on his teammates. Here’s to hoping all my suspicions are invalid, Murphy rakes his way through the rest of the season and into the postseason and the Nats figure out a way to bring him back next year.