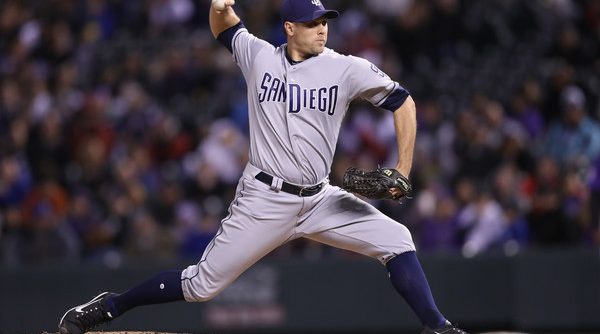 The Nats’ bullpen has been in flux for most of the season, what with injuries and inconsistency. It’s been better of late, but the reality is that the Nationals are going to have to make some changes if they want a rock-solid, scary bullpen, and especially if they want a chance at making a deep run into the playoffs. Last year, their bullpen was their biggest weakness, and they don’t want that to happen again this year. At the deadline, they’re likely going to have to make a move to shore up that bullpen. My proposed solution: bring Craig Stammen back to the Nationals.

A lot of you have bad memories of bullpens past for understandable reasons, but Stammen was never the problem. I only have positive memories of Stammen, and he fits the role that the Nats are currently lacking. He’s a right-handed reliever who can be your long man and eat up innings or come in and help you out in a pinch. I have very clear memories of multiple occasions when he came into a bases loaded no outs situation and he let in precisely zero runs. He was nothing but solid in his tenure with the Nationals (that is, as a reliever — I wouldn’t dare put him in to start).

Stammen was a beloved bullpen piece for the Nats since 2009, and his work was consistently solid and reliable. In his career in DC, he had a 3.91 ERA and 370 strikeouts in 490.2 innings pitched. That ERA might not look fantastic, but those also include his numbers as a starter, which did not go so well for him. In his career as a reliever (also including his time in San Diego up to Thursday), he has a 3.00 ERA and 358 strikeouts in 381.1 innings, opposing hitters are hitting .242, and his strikeout to walk ratio is 2.86.

So far this year, he’s been pitching as well as he ever has. This season, after 17 appearances, his ERA is a clean 2.14, his WHIP is 0.95, he’s only given up 5 runs total (and 1 home run), he’s walked 4 and struck out 22. The only reliever in the Padres bullpen with a better ERA is Kirby Yates. Stammen has better numbers (though fewer strikeouts) than their All Star closer Brad Hand.

Stammen would provide unimaginable relief to the Nats ‘pen. The only current Nats relievers with a better ERA are Sean Doolittle and Wander Suero. The righties need a lift, and Stammen provides that.

Is this all just nostalgia for him? Perhaps just a little bit. Stammen had an unceremonious departure from the Nationals. In 2014, he pitched in five games, suffered an injury, and he was never seen again in a Nationals uniform. That injury ended his season, and the Nationals didn’t keep him (which, in my opinion, was a mistake). He didn’t pitch in the majors in 2016, and then the Padres picked him up in 2017. It was unceremonious, and it felt like everyone just forgot about him, and I feel that an organization that he was with for a decade owes him just a little more recognition for everything he did.

Here’s my proposal: the Padres won’t be contending anytime soon. They’re still floundering in the basement of a competitive NL West (even though the Dodgers are challenging them for that position). They’ve got a couple of really good players they can probably move at the deadline. I think Stammen could be one of those players, and I think the Nats should grab him and shore up the bullpen. And that might also bring some morale and camaraderie back; I know Stammen’s besties Tyler Clippard and Drew Storen aren’t here anymore, but a lot of his old teammates are still here and I’m sure they’d love to rekindle that friendship. A happy clubhouse is a successful clubhouse, right?

The only thing that might turn the Nationals away from making a deal would be the contract. Stammen is under contract for this year and next, and he’s owed $2.25 million over each of those years. That number is not a lot considering what some of the other guys on the team make, including some of the relievers (four of the current relief pitchers make more than Stammen does), but the Nationals have a considerably bigger payroll than the Padres do, and it’s all a question of if ownership wants to pay it. Or, if they could somehow work out a deal to share the cost. I’m no expert at this sort of thing, but it’s something to keep in mind.

To summarize: Craig Stammen has been pitching great for an organization that does not necessarily have pertinent need for him, and we have a place in our bullpen for him. He would make us better, and the Nationals should try to work out a deal near the trade deadline. Heed my words, Nationals. Giving up on him was a bad move, and he deserves a second chance in DC. Bring him home.