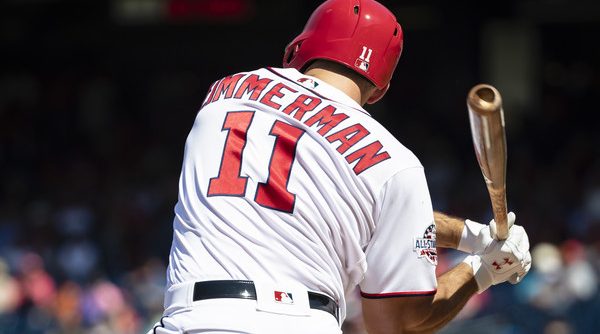 My most prized possession in this world is a signed Ryan Zimmerman Nats jersey. I wore it to every home game I attended for a span of years until, two winters ago, I met Zim at an event and he signed it. Now, it holds a special place in my closet until I find the wall space required to hang it on the wall.

For most Nats fans my age, Zim was an important part of becoming at Nats fan. He was the best part of the franchise’s early dark years, though he always remained somewhat underrated nationally. He’s made just two All-Star teams (one of which occurred last year) and his highest finish in NL MVP balloting (16th in 2010) happened despite ranking 4th among National Leaguers in Fangraphs WAR.

All that to say, my love of Zim runs deep. And as much as it pains me to ask the question, the question must be asked: Is Ryan Zimmerman washed?

Last year, Zim put up his best season since 2012. He hit over .300 and cracked more than 30 bombs, which more than made up for his swinging-door defense. But based on his 2018 performance, 2017 feels more like the exception than the new normal. 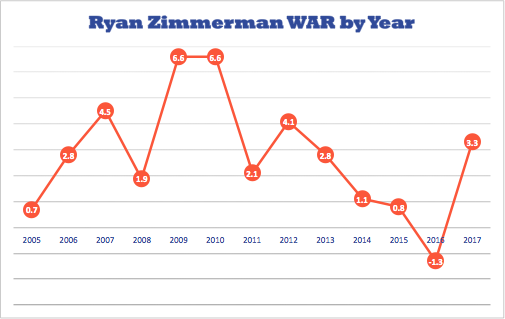 Based on Fangraphs WAR, Zimmerman is the 20th worst position player thus far. To add injury to insult, he’s nursing back and side soreness that has him missing time. Bit as they are with the injury bug, any kind of extended absence, for as little as he’s produced, hurts the Nats.

His absence hurts the Nats because the numbers suggest Zim has been horribly unlucky, not just horrible.

As of Sunday night, Zim’s slashing .194/.256/.398. The first two would be career worsts, while his slugging percentage would rank second worst. It’s possible he’s not seeing the ball as well. It’s also possible he can’t hang with the young’uns anymore. But neither of those possibilities seems true.

In 2018, Zim is striking out 20.5% of the time, a clip that’s 1.4 percentage points lower than his 2017 number. He’s also hitting the piss out of the ball. His hard hit percentage (44.1%) ranks 23rd in all of baseball, and the average exit velocity on his batted balls (95.3 MPH) ties him for second-place with some guys named Miguel Cabrera and Aaron Judge, according to Statcast data.

The problem? It sounds easy, but the hits just aren’t falling. His .203 batting average on balls in play (BABIP) ranks 10th worst, two spots lower than Bryce Harper (imagine what happens when Harper’s luck starts to turn.). Zim’s seeing more sliders this year and is making less contact on pitches thrown outside the zone than at any point in his career, which probably bears monitoring as the season progresses. But despite all the bad outcomes, he’s hitting the ball well.

It’s just a matter of time before it starts to show.