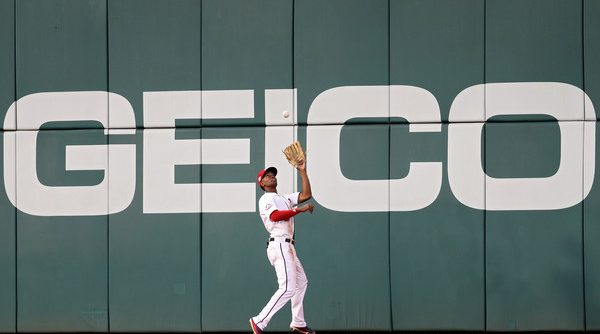 Michael A. Taylor is one of the more polarizing Washington Nationals. Since his first sustained big league action in 2015, he’d graded as a slightly above average position player who’d combine out-of-body athletic moments with liver-soaking runs of failure.

Then, in 2017, he took a huge step forward. He slashed .271/.320/.486 on his way to a 105 wRC+ and 3.2 Fangraphs WAR, which would have 10th among centerfielders had he logged enough plate appearances to qualify. He even played his typically strong defense.

He hasn’t hit this year (a subject that deserves 800 words all its own), but his glove has been fine. Better than fine, actually: the word I’m looking for is elite.

The Nats have now played 42 games (as has Taylor), which means we’re more than a quarter of the way through the campaign. So far, Taylor is the best defender in baseball.

Watching Taylor play centerfield is like watching a linebacker square up a quarterback. With his center of gravity low and arms splayed wide, you can see why people lionize Byron Buxton’s defense. Buxton glides on air; Taylor’s legs are heavy, but he gets where he needs to be.

Statcast calculates a metric called Outs Above Average, which compiles the outcomes of every play into one season-long number. Thus far in 2018, Taylor’s OAA of 7 ranks first (Buxton has played in just 14 games this season due to injury). But we can dig deeper into that.

So even while he’s not hitting, he’s brought his glove to the ballpark each and every day. And he’s making plays.