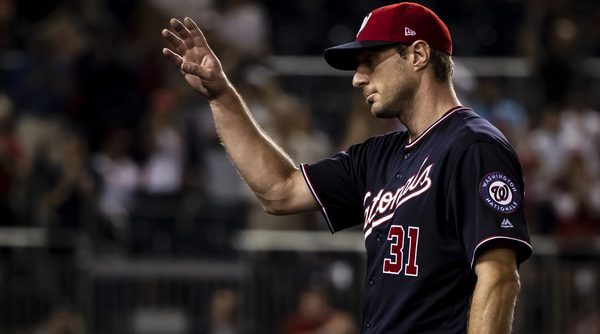 The Nats have been dealt more than their fair share of injuries to start the year. Naturally, their offense is suffering because of it. The club batting average as a whole is .244, which is better than it was a few weeks ago, but still not where they’d like it to be. The bullpen has been shaky, though they’ve also been finding their ground of late.

But through it all, the starting pitching has been great, and their efforts have kept the Nats from plunging into the cellar. Instead of getting pummeled in their losses, they’ve been losing close games. Their starters have been going fairly deep and keeping them in it, even if the offense can’t reward them with a win.

The starting staff has a collective ERA of 3.30, and opposing hitters are only batting .216 against them. Only the Cardinals, Braves, and Astros have a better ERA from their starters. They’ve also shouldered a bulk of the innings, pitching a collective 193.2 innings; only the Astros and Indians have gotten more innings out of their starters. Needless to say, the Nats starters have put the rest of the team on their backs thus far this season, and they’ve been better than most of the league.

Max Scherzer looks to be back to Cy Young form. In seven starts this year, Scherzer is 6-1 with a 1.79 ERA, 65 strikeouts, a 0.82 WHIP, and a .161 batting average against. In all of his starts, he has only gone less than six innings once, he has not struck out less than seven batters, and his ERA has not been above 2 at any point this season. He is still the cream of the crop, and does not look to be slowing down. Plus, he’s wreaking havoc at the plate and on the basepaths, too.

Stephen Strasburg hasn’t been doing too shabby, either. He’s run into some bad luck and has had a shaky start or two, so his record is just 3-3 in seven starts and his ERA is 3.47, but opposing hitters are only batting .218 against him, and he’s struck out 54 batters. Strasburg, despite not getting a lot of luck or run support at times, has been eating up important innings — he has not gone less than 6 innings in a start this season.

Gio Gonzalez looks to repeat on his stellar season last year. He is 3-2 in six starts, with a 2.67 ERA. He hasn’t been going as deep in his starts as Scherzer or Strasburg typically have, but he has not given up more than three runs in a game. And his best start of the season so far was his most recent against Arizona, when he went 7 innings, giving up just 1 run on 6 hits and 2 walks, striking out a season-high 8. He’s been solid, but when Gio gets hot, look out.

Tanner Roark looks to be regaining his 2014/2016 form. Over six starts, he’s 2-2 with a 3.55 ERA, with a fairly tidy 1.03 WHIP and a .194 batting average against — meaning he’s been running into some bad luck, as well. His stuff looks great, and he’s been going fairly deep into ballgames — he’s gone 6 innings twice, and 7 innings three times. The bulldog has been doing bulldog things again.

Jeremy Hellickson has been a welcome addition to the end of the rotation, and he’s provided some much-needed innings. He’s pitched well enough for a couple of wins, but he’s recordless through four starts (gotta get that offense in early so we can get this man a well-deserved W), his ERA is an even 3.00, his WHIP is 1.05, opposing hitters have a .234 batting average against, not to mention he’s a pretty solid fielder, too. He has yet to go past the sixth inning, but as he builds up his strength throughout the season, I expect that will change. Regardless, the fifth starter situation is endlessly better now than it was a month ago, thanks to him.

Each of the starters should have another win or two on their resumes, but hopefully the now-hot offense can make up for that in the coming months. The starting pitching has been steady the whole season, but they look to be heating up along with the bats and the bullpen, and a four-game sweep of the Pirates looks to have everybody clicking. The starting pitching is going to be a strength all season, but the rest of the team is going to have to give them the proper support.