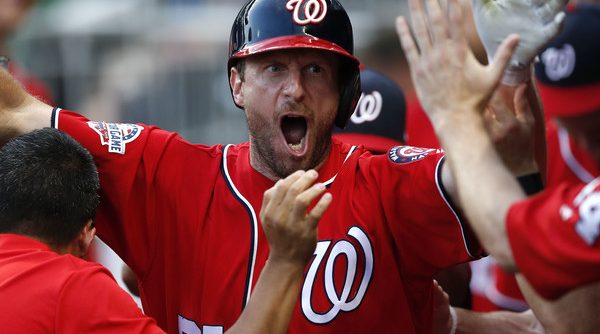 I’ve been one to advocate and campaign Nationals players for individual awards in the past. Tanner Roark for Gold Glove, Gio Gonzalez for a Cy Young nomination, Michael Taylor for Gold Glove, Ryan Zimmerman for Comeback Player of the Year. This year, I have a new campaign: Max Scherzer for Silver Slugger.

At this point, I’m convinced Scherzer wants that award more than another Cy Young. Dude is a madman at the plate, and you can tell he lives for those moments, especially when there are runners on the bases and he has the chance to help his own cause.

Scherzer is making the regular hitters on his team look bad. On a team struggling to string hits together and drive in runners on base, Scherzer is one of the better hitters. He’s hitting .250, which is better than all but five players currently with the team (Eaton, Soto, Rendon, Adams, Turner). Up until a few games ago, Scherzer was hitting close to .300. He’s out-hitting his teammates, or at the very least hitting just as well as them. He’s not hitting well for a pitcher, he’s hitting well for a major leaguer.

Like his pitching, Scherzer is clutch in his hitting. While his team is only collectively hitting .250 with runners in scoring position (which is, admittedly, better than it was a week ago), Scherzer is hitting .417 with 5 RBI and only 2 strikeouts in 12 at-bats. Scherzer has had a significantly fewer plate appearances than his teammates, but he always makes an impact when he’s in the lineup. He’s not an easy out, and he’s always looking to drive in runs. On the year, he has 4 RBI and 3 runs scored along with 1 walk in his 16 games started, which is not nothing, because he’s always driving in runs in opportune times.

But how does he stack up against his competition among opposing pitchers? Let’s look at the current season stats of the usual suspects, the last couple of Silver Slugger winners among pitchers: Zack Greinke, Madison Bumgarner, Jake Arrieta, and Adam Wainwright.

Bumgarner lost significant time due to injury and has only pitched in three games thus far, and he has yet to get a hit so far this season, so he’s out of the picture. The same goes for Wainwright, who only appeared in four games and recorded no hits, and is currently on the 60-day DL. Arrieta is hitting just .167 in 24 at-bats through 13 games, with 4 hits, 1 home run, 1 RBI, 2 walks, and 13 strikeouts. Probably not going to win you a Silver Slugger.

Greinke, however, is another story. His average is the same as Scherzer’s, .250, in 24 at-bats through 13 games. However, his on-base percentage is higher than Scherzer’s (.333 compared to .289), due to his 3 walks over Scherzer’s 1. He has 3 RBI (Scherzer has 4), 2 doubles (Scherzer has 1), 2 runs scored (Scherzer has 3), and 7 strikeouts (same as Scherzer). Additionally, he, like Scherzer, has also stolen a base. The two are incredibly tight in all of their numbers, though Scherzer stands out league-wide in some categories. He has the most hits among pitchers (9), the most at-bats (36), and T-most RBI (4). He has also not racked up as many strikeouts as he could have. Scherzer is putting together a very strong case numbers-wise.

There are, however, a few dark horses in the race. Patrick Corbin of the Diamondbacks has a .259 average through 14 games, 7 hits in 24 at-bats, 1 double, 2 RBI, 1 run scored, and 2 walks, though a pretty hefty 12 strikeouts. He’s not producing as much as Greinke or Scherzer, but he’s hitting and getting on base enough to make some noise. There is also German Marquez of the Rockies. He’s hitting .308 through 15 games, and he has 8 hits in 26 at-bats, 2 RBI, 1 run scored, and only 5 strikeouts. He also does not have as much production, but he’s certainly someone to keep an eye on as the year unfolds.

There’s some competition out among the league, but Max Scherzer has a very strong and compelling case. His numbers are fantastic, he’s hitting fairly consistently, he’s producing, he’s clutch, and he’s leading his team to wins. Saving a huge offensive outburst from Marquez, Corbin, or Greinke later in the year, I’d predict there’s a good chance Scherzer could go home with a brand new, bat-shaped piece of hardware this year.