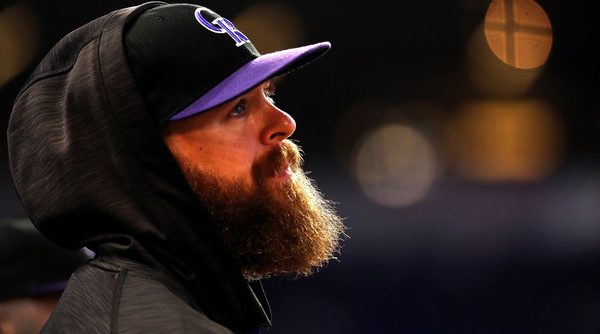 Usually, there’s a pretty clear picture of all the prospects in the minors that the Nationals can call up if they need to. When a reliever gets the call, usually there’s a feeling of “I’ve heard of that guy before.” But Justin Miller? He came out of nowhere. The only thought when he came up was “Who?” Now we seek to answer the question: Who the heck is this man?

Miller started his career with the Tigers in 2014. He pitched in eight games, and it didn’t go so great for him. In 12.1 innings, he gave up two home runs and finished with a 5.11 ERA. He ended up getting DFA’d by the Tigers and outrighted to their triple-A affiliate in Toledo. He had much more success at there that season, where he finished with a 1.81 ERA and 7.86 K/9 in 44.2 innings.

He struggled that season, and he did not re-sign with the Rockies. In fact, he did not pitch in the big leagues in 2017 at all.

The Angels signed him to a minor-league deal, and he pitched 38 games for their triple-A affiliate (5.48 ERA, 37 K, 8 BB), but they released him midseason. Miller put in some work during his absence from the majors because he has reinvented himself.

He may have popped out of nowhere, but that is overshadowed by his performance on the mound thus far: He has yet to give up a run with the Nationals. In fact, he did not give up a run in his time in Syracuse, either. In 13.2 innings with Syracuse, he had a 0.00 ERA, a 0.44 WHIP, a BB/9 of 1.98, and a K/9 of 15.15. This unlikely success has translated to what he’s been able to do with the Nationals. In six games, Miller has pitched 7.1 innings, collected two wins, earned a 0.14 WHIP, has only given up one hit, has walked no one, and has struck out 14.

The stuff he’s been doing is remarkable and completely deviated from his career averages. It’s so abnormal for him that you’re left wondering if he’s even the same guy. I’m not smart enough to tell you what he’s doing differently to account for this turnaround, I don’t know him well enough. Regardless, I really like what I’m seeing. With the revolving bullpen the way that it is, it’s comforting to see a guy, even a no-name like Miller, come in and completely shut opposing hitters down. Unless something changes drastically, keep him around as long as you possibly can.