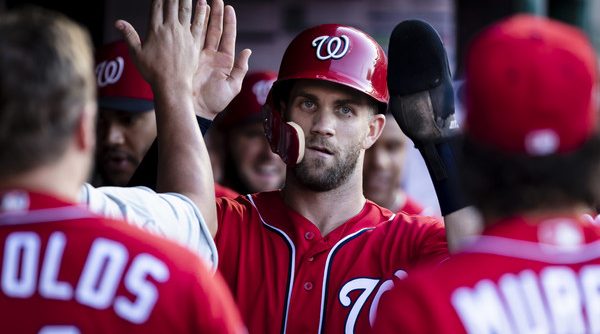 Figuring out what has gone wrong with the 2018 Nationals is a multi-pronged study in disappointment. Few of the stars are starring, injuries have riddled the lineup and rotation and a certain swagger seems to be missing. Whether or not that’s because a certain bearded guy and a certain well-seasoned manager are both not around anymore, I’m not sure. But I’ve talked to numerous other Nats fans over the last few weeks and each one has mentioned how the boys don’t really seem to be enjoying themselves. Now, obviously, it’s a lot easier to have fun when you’re winning than when you’re losing, but there’s a malaise settling over this team that we never saw from the Dusty Baker-led group of 2017. Hopefully, that changes after Thursday night’s thrilling comeback victory over the Marlins.

But let’s not fool ourselves. The Nats are still just 45-44 and in a tight spot in the playoff race. The margin for error is gone already, a situation the team never even came close to facing last season. I decided to look back at the 2017 squad to try and figure out what the hell has happened this year.

Let’s use July 4th as a snapshot. It’s a good date to work from, as the league gears up for the All-Star break and the season is at least halfway finished for every team. Around this time each year, the contenders and the pretenders emerge as the stats begin to stabilize, with significant upheaval in the standings increasingly unlikely from this point forward.

After the games of Independence Day were completed in 2017, the Nats stood in first place in the National League East by 9 games. Their record was 50-34. They had just beaten the Mets by scores of 11-4 and 3-2 in their two most recent games, continuing their dominance of a team presumed to be their toughest challenge in the division as the season began. A playoff spot was well in-hand, with FanGraphs putting the Nats postseason probability at 99.3%. 99.3%!

The production from the lineup to that point had been stunning. Bryce Harper (1.031 OPS), Ryan Zimmerman (.982 OPS), Daniel Murphy (.970 OPS) and Anthony Rendon (.947 OPS) were all legitimate MVP contenders. Hell, the Nats scored those 11 runs on July 4 without Zimmerman or Rendon in the lineup. Even bench bodies like Adam Lind (.917 OPS), Brian Goodwin (.838 OPS) and Ryan Raburn (.827 OPS) were lighting up the scoreboard. Adam Eaton had been out for months and Trea Turner was in the midst of a prolonged absence due to a broken wrist. Those losses didn’t matter. The Nats had tallied 469 runs through the Fourth, tops in the National League by a wide margin.

Compare that to the sigh-inducing offensive numbers for 2018, from the starters (injured and healthy) to the bench, and one can see why the ol’ win-loss record isn’t up to snuff. The Nats simply aren’t getting the front-line or depth production from their bats that is necessary for a run to the postseason. Only four currently active players have an OPS over .800: Juan Soto at .982 (who’s played in so few games he doesn’t even qualify for rate statistics), Matt Adams at .952 (who was brought in to be a backup), Rendon at .862 and Harper at .836. After featuring four MVP candidates at this time last summer, the 2018 Nats lineup may not even have an All-Star-caliber performer in it. We should all be yearning for the days when the only complaint about the offense was where Dusty batted Rendon.

That scalding hot first half offense of 2017 offset the terror that was the Nats’ bullpen prior to the trades for Ryan Madson, Sean Doolittle and Brandon Kintzler. The 50-34 record could have been way better with a relief corps that wasn’t a total dumpster fire, as the group had been responsible for 11 losses through July 4 (I figured this out via Baseball-Reference, adding up blown saves that eventually led to losses and blown saves that directly led to losses). With anything remotely resembling a steady bullpen through the first 84 games of 2017, the Nats easily could have been 57-27 or even 60-24.

Flash forward to this season and the ‘pen is nowhere near the disaster that it was, but what alarms me is the ineffectiveness of Kintzler and Madson, who were both vital in turning the 2017 version around. Add in the age and injury history of both arms and you realize that Mike Rizzo’s addition of Kelvin Herrera was downright essential for the Nats. While Justin Miller, Shawn Kelley and Matt Grace have been steady, relying on those three for consistent production in high-leverage situations is….not ideal. Sean Doolittle remains a monster, but the days of The Law Firm may be over already.

I have to note that when compared to the rest of the National League, the Nats’ collection of starters has been solid. The group is 3rd in WAR and FIP while placing 4th in ERA – and this is with extended absences for Stephen Strasburg and Jeremy Hellickson.

However, I’d argue that the state of the current rotation, not the stats, is a cause for concern when compared to the 2017 group. Tanner Roark (6.92 ERA across last 7 starts and 1 relief appearance) and Gio Gonzalez (7.86 ERA across last 6 starts) are trending downwards, a troubling sign that the best days of both pitchers are well behind them. Strasburg is dealing with an inflamed shoulder that led to his annual trip to the disabled list. If he comes back pitching like the Stras of 2017, no worries – but that’s no guarantee. The fifth spot, which has seemingly been in flux since Joe Ross went down for Tommy John surgery last year (his final start came on July 9), seems to be in Hellickson’s hands now, but who knows how long the journeyman can produce positive results (last night’s start was not a good sign). Erick Fedde has made no noticeable development, posting 19 strikeouts and 9 walks in 28 innings while running a 5.79 ERA, and now he’s on the DL, too.

“Max Scherzer And A Bunch Of Dudes” is not really going to get you to 90 wins and October baseball. Last year, the Nats got consistently reliable results from Scherzer, Stras and Gio, while Tanner served as a solid no. 4. That has not been the case so far in 2018.

Any in-depth comparison of this year’s team in its current state to last year’s team at just about any time was going to be painful. What this examination illustrates is how the 2018 Nationals have fallen to where they are, and what drastic improvements they’re going to need to make to come anywhere close to where the 2017 team ended up.