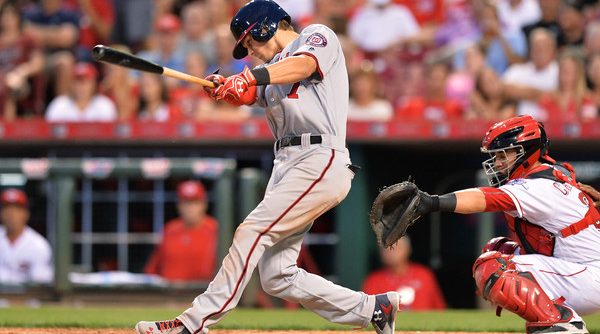 On Friday, the Washington Nationals called up Trea Turner from Triple-A for the first time this season. While I will not debate the merits of Danny Espinosa versus Trea Turner — more eloquent writers than myself on The Nats Blog penned many an article on this very topic — I would like to discuss how Turner can take advantage of the one undisputed quality that sets him apart: speed.

Speed is not a universally wanted quality in baseball. It is always a plus to have a speedy player on your team, but David Ortiz and Wilson Ramos illustrate how you can be a great hitter without this elusive quality. It is also harder to visualize its impact in baseball compared to other sports. It is not hard to notice speed in football, basketball or soccer where a athlete can display his prowess with one-on-one races. But despite these visual obstacles, any casual observer can tell Trea Turner is fast. Very fast.

How fast? Well, at North Carolina State Turner clocked in with a 4.27 second 40-yard-dash time. That… that is ridiculously fast. Now, I don’t know how NC State clocked this time, but, to put things in perspective, 4.27 seconds would be tied for the third fastest 40-time in NFL combine history. Regardless of what his raw speed numbers are, Turner is by far the fast member of the Washington Nationals and one of the fastest players in the league.

But how can Turner capitalize on this abundant asset? To properly answer that question, let’s take a look at two case studies of known speed demons: Billy Hamilton and Dee Gordon.

Since the Nats are playing the Reds, its only fitting our first candidate is Billy Hamilton. Hamilton is a prime example of how speed can only take a player so far. Since 2015 (I included last year to get a fair comparison with Dee Gordon since he is currently suspended for PED use), Hamilton is slashing .233/.280/.311. The OPB of .280 is the concerning number. You can only be a threat on the bases if you actually get on base. Part of Hamilton’s problem is he is an extreme fly-ball hitter. He has a 1.28 GB/FB ratio. A ball hit in the air doesn’t take advantage of your speed to first base and has so far been Hamilton’s Achilles’ Heel.

Dee Gordon, on the other hand, won the batting title last year for the Miami Marlins and was on pace for another excellent season before getting busted for PED use. He slashed (again, stats since 2015) .324/.349/.408 with a 107 wRC+. A look at his peripherals; walk rate, strikeout rate and contact rate, all mirror Billy Hamilton except for the aforementioned GB/FB ratio at 2.97. This allows Gordon to take advantage of his speed and pumps up his BABIP to a full 100 points above Hamilton at .375. It also allows him to get more hits on the infield, leading the league with 39.

So both players have vastly different hitting numbers based on how they hit the baseball. What can Trea Turner learn from this case study? Keep the ball on the ground! Turner will be a solid, everyday player in the Majors, but it is too soon to tell if he will be a great hitter. Dee Gordon set the successful hitting profile for speedy, contact guys; it’s up to Turner to follow it.