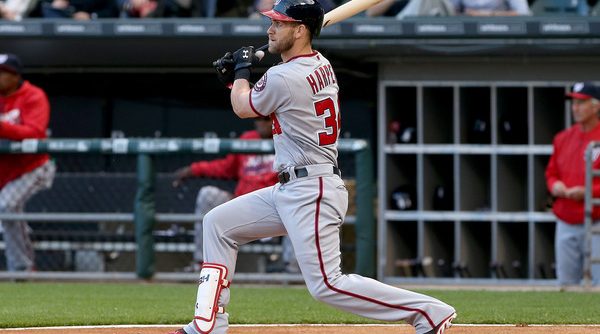 In the National baseball League, the Washington Nationals are represented by two separate, yet equally important, groups: the players on the field, who win games; and those same players off the field, who spread joy and fun wherever they go. These are their stories:

1. Bob Carpenter is a man of many talents: home run calls, false alarm home run calls, and other stuff, I’m sure. But on Wednesday night it became clear that the man has talents he had previously hidden from the public. Buttoned-up Carpenter graced the airwaves and the ears of those tuned in to the broadcast with a freestyle rap.

You never know what’s going to happen at a big league game! #priceless #Nats. Carpenter rap in the 5th https://t.co/65yzvIA07E via @mlb.

Biggie would be proud, Bob. Maybe.

2. Y’know how little kids make their superhero action figures from separate storylines/universes play together? That’s kinda what it’s like when superstars from different sports get together and have a lovefest for all of instagram to see. It’s that good, and even better when Bryce Harper and the U.S. Men’s National Team’s Tim Howard are involved.

Thank you, sports gods, for this magic moment, but please keep Bryce away from the goalie box before we lose to soccer instead of the Yankees.

Sorry skip, I’ll be at Soldier Field tmrw in the net for the States! #USA🇺🇸 #copaamerica

3. Remember the little Nats? Those tiny baseball players that got their hair cut by Bryce Harper to try to combat a losing streak? Well, it definitely worked as, according to Scott Allen, they are now 23-0 since the encounter.

But I’m among those not convinced that they’re not the reason for Bryce’s recent slump.

ok, now give him back his powers. https://t.co/6d8uiPUuWo

4. Baseball Twitter’s infatuation with food opinions borders on unhealthy, and even extends to condiments. Specifically, mustard vs. ketchup use on hot dogs. This week, Jayson Werth’s Beard sought after the opinions of Nationals players and Clint Robinson so kindly clarified his own stance and united the base:

5. Last week, Bryce Harper’s instagram game went through the roof and this week he confirmed his status as a food connoisseur and Crazy, Stupid, Love aficionado. Bryce (or Ryan Gosling) might be right, we should all strive to be better than the gap.

6. Baby Zimmerman arrived on June 2. With Hayden’s arrival came the first member of the Nats Baby roster, an extremely adorable first member, in my humble opinion.

Big congrats are in order for Ryan Zimmerman and his wife, @HeatherZiMS, who welcomed a baby girl on Thursday!

Thank you for all the well-wishes! Headed home with our newest Princess today! pic.twitter.com/4WFHgRYNhd

7. James Wagner, beat writer for the Washington Post announced that he is a #trader this week, as he heads to the New York Post to cover the Mets. As our collective hearts couldn’t break anymore, teams like the Reds got in on the James Wagner Farewell tour probably just to rub in the reality that we soon won’t be able to enjoy Wags’ coverage anymore.

So I have indeed accepted a job at the New York Times to cover the Mets. I’m very excited about this new adventure at a great paper.

There’s no strong evidence, however, that Wags isn’t just doing this so he can spend more time with soon-to-be-fellow beat writer Anthony DiComo.

8. The the beginning rounds of the MLB draft took place on Thursday night. It was preceded by a week of reminiscing draft picks of the past like Ryan Zimmerman and Bryce Harper.

Can’t believe it’s been 6 years..Wow, what a ride it has been! DC can’t thank you enough, it is a pleasure and I am humbled to wear the curly W on my chest every night💯 #Nationals

But, scouting scales and performance projections aside, the most exciting pick of the night was Carter Kieboom. Brother of Spencer Kieboom, who is a catcher currently on the Harrisburg Senators roster. Honestly, more than anything, this is proof that Mike Rizzo thinks he gets extra points for collecting brothers.

For your consideration, the Tweets of the Week:

A love story about a man and his napkin. pic.twitter.com/XqEhDuZQ1Z

I don’t how but I see a resemblance in these 2 pics. Machado is Bob and @FightinHydrant is Ventura pic.twitter.com/uG9QP63CuK