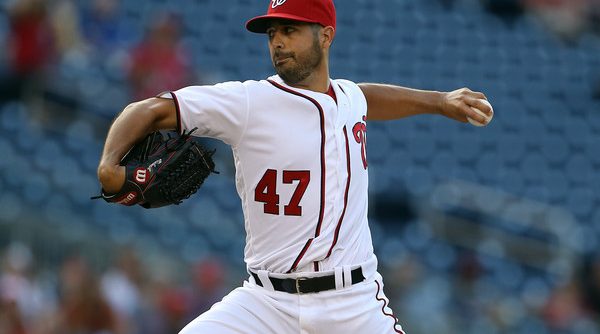 The Washington Nationals may be soon faced with quite a difficult choice. No, not Trea Turner versus Danny Espinosa — I think Espinosa’s seven-RBI performance against the Reds put that to bed for a little bit. The Nats have too many options and too few roster spots. With Stephen Strasburg’s imminent return to the roster and the solid debut from the number one prospect in all of baseball in the form of Lucas Giolito, the Nats now have six potential options for their starting rotation and only five roster spots. Compounding the problem for the Nationals, after a hot start, Gio Gonzalez has not performed well and his struggles and stuff are in stark contrast with Giolito, which makes him and easy target for demotion discussions. Decision time for the front office: Do they keep Giolito up at the major-league level and adjust the rotation or send Giolito back down to Triple-A Syracuse for more seasoning?

Let’s start by putting Giolito’s start in perspective. He did well. Four innings of shutout baseball against the reigning NL champions is nothing to sneeze at. He had one impressive strikeout and only allowed one weak hit. He definitely passes the eyeball test. His fastball is electric and that curve is sublime. But he did show the command issues that have plagued his young career. All in all it was a solid start. I am definitely excited about his future with this team, but is that enough? Is four innings enough to replace Gio Gonzalez in the starting rotation?

Most fans would give an unqualified yes to that question. Since Gonzalez’s May 18 start where he gave up one run, he has given up seven, six, five, three, three, five and six runs in 37 innings. He started off the year on fire, but now “Bad Gio” is back in force. Even with a double-digit lead in his most recent performance he still managed to give up four runs.

The eye test is also not helping his case. Mike Maddux got the credit for getting inside Gonzalez’s head early in the season and helping him work though his mental issues on the mound. As of late, he looks like a crazy person talking to the voices in his head out there.  When he gets into tough situations, he is having a hard time bearing down to get out of the jam.

But this is Gio. We know what we signed up for this year from him. We signed up for good Gio – everything up to and including his May 18 start – and bad Gio – everything since then. In reality, his numbers this year are not that much different – and in some cases better – than his career marks. His K/9 and BB/9 rates are all down from last year. His ERA is higher, but his FIP is within shouting distance of previous efforts. This is our lovable, crazy guy.

I think Lucas Giolito would be best served ironing out a few wrinkles down in Triple-A and possibly joining the club for a playoff push later in the year when the rosters expand. I know how good Giolito looked, I was just as much a fanboy in the stands for his debut as anyone else, but he is not quite a finished product and Gonzalez will not be bad Gio all year. He deserves a chance to right the ship while Giolito refines his stuff down in the minors.