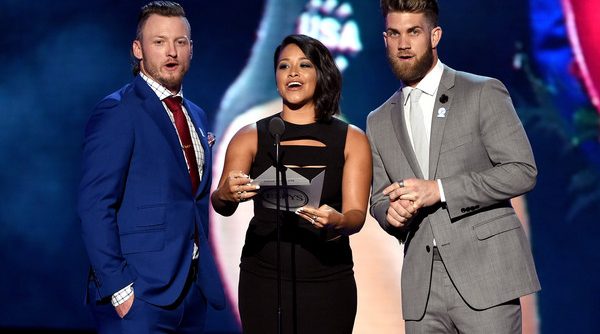 1. After a 12-hour build up, Kayla Varner, former Ohio State soccer player, announced her engagement to Bryce Harper via Instagram. Varner’s decorated ring finger was present in pictures taken Tuesday night at the All-Star Game with her soon-to-be husband, but didn’t officially announce the second go at their engagement until Thursday afternoon.

ESPYS last night with my love. So proud of you, B! Oh and WERE ENGAGED… Again 💍✨ #TheSequel #AllStarBreak

What a week it has been! Thanks to everybody who was involved and made this week possible🙌🏼 #OnToTheNext

2. Coworkers are great because their existence and altruism sometimes means that you can skip being a functioning adult and eat the donuts in the break room instead of a substantial breakfast. A clubhouse isn’t the typical work environment, but Clint Robinson and MASN sideline reporter Dan Kolko’s twitter conversation exhibit that, at least in this respect, it’s not so different.

@BatHoarder I was selfish yesterday, and I vow to improve.

3. The Nationals are nothing if not hair-follically blessed. (Though, that may not be an official value of the organization given GM Mike Rizzo’s stance against full bearded headshots.) On most given nights, about half of the starting lineup is rocking full-bearded chins. Trea Turner must have a feeling an extended stay with the big club is coming, because he too has recently been spotted with a chin of fuzz, likely in order to fit in. For those wondering, this does officially give Michael A. Taylor the crown for Most Baby-Faced.

4. Max Scherzer’s two different-colored eyes denotes that he has something in common with 57% of the siberian husky population and, somehow, that he has a designated pitching eye. Scherzer is also known for his tenacity and strong preferences about when or whether he’s coming out of a game. Both of these Max-isms collided during a mound visit.

5. While Bryce Harper was assuming his rightful ownership of the ESPY for Best MLB Player, the Nationals twitter account held ESPIs of their own. Danny Espinosa, nicknamed Espi, fittingly cleaned up at the social media based award show. Though “the Espis” most often refers to Espinosa’s family, it served a worthy purpose.

The #ESPI for Best Time Homering From Both Sides of the Plate in the Same Game goes to Danny Espinosa! 🏆 pic.twitter.com/923xQIWHNr

The #ESPI for Second Best Time Homering From Both Sides of the Plate in the Same Game goes to … 🏆 pic.twitter.com/Lbc3o8FtYN

The #ESPI for Prettiest Jump Throw goes to – would you look at that – Danny Espinosa! 🏆 pic.twitter.com/EhmUQDssc0

6. Clint Robinson is no Brandon McCarthy, but he is the most active Twitter user on the Nats. Robinson’s regular interaction with fans and playful banter with a certain sideline reporter make his twitter presence amusing. The entertainment can also be informational, it seems, when he opens up his twitter for a Q&A with fans. As good at Twitter as Brandon McCarthy is, he could never know who on the Nationals is playing PokemonGo, or that the Sandlot is Robinson’s favorite baseball movie, or that what happens on a team flight is top secret intel.

Flight delayed…bored 🙄 help me out guys …questions, comments, whatcha got?

7. F.P Santangelo and Mr. Met have a long and storied past that can simply be summed up by saying that F.P. is terrified of the baseball-headed mascot. Actually, F.P. is afraid of most mascots. So, although a picture of an announcer and a giant baseball person isn’t much in the wake of tragedy, the sentiment is still noble.

9. The All-Star Game was eventful for the Nats: the team sent a record number of players, Bryce Harper got his first ASG hit, Daniel Murphy had two hits (and wrote Mets GM Sandy Alderson’s name on his Stand Up To Cancer placard), and Wilson Ramos got to catch Max Scherzer’s fastest pitches of the season (upwards of 99 MPH). Most importantly, Stephen Strasburg debuted the most dispassionate golf clap the world has ever seen when David Ortiz was pulled from the game for a pinch runner.

Last and least, the Tweets of the Week.