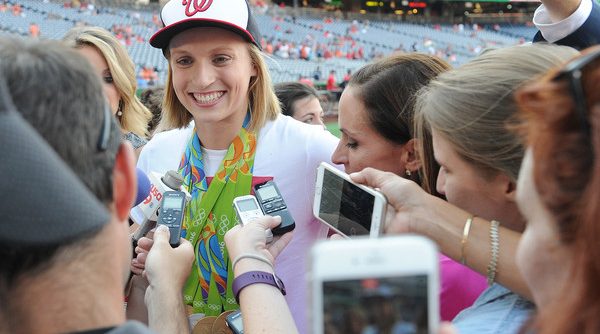 The assumption has been always been that Bryce Harper is and should be a baseball player. Okay, fair. But Wednesday night Katie Ledecky may have revealed his true calling, discovering just how good he is at proudly displaying her five Olympic medals, the proof of her mermaid-dom.
Fresh off dominating and demoralizing the souls of the best swimmers in the world at the Rio Olympics, Ledecky — a Maryland native and likely a descendant of Ariel herself — took on Nats Park to throw out the first pitch. After decorating Harper with the medals like the Christmas tree he was always meant to be, she threw a strike that would at the very least have Renee Rivera swinging with the MVP standing tall next to her.

Bryce Harper held Katie Ledecky’s medals for her as she threw out the first pitch: pic.twitter.com/ePqZsIzRok

Here’s where the standard joke about Katie taking a spot on the tired Nats pitching staff would go. But it wouldn’t be a joke. Please help them, Katie. The wins are dying.

Ledecky revealed she had the idea of a player holding her medals in a chat with the Nats broadcast booth. She told Bob Carpenter and F.P. Santangelo that Harper had volunteered for the job, probably fulfilling his lifelong dream of becoming a human medal rack. In the full interview with the MASN booth, Ledecky talks about having practiced for the gig with her neighbors. But she already has more first pitch practice than any aquatic Disney creature she may or may not be related to, as she also did the honor in 2012 and 2014.

Santangelo seemed a little starstruck in the booth, but Sammy Solis is the best fangirl on the Nationals. That kind of title requires on-point Insta captions and the guts to ask for pictures. Solis didn’t disappoint. The clubhouse challenged him for the title, reportedly fawning over Ledecky and her medals. Koda Glover also posted a picture with Ledecky, and a twitter exchange between Erica Scherzer and Amanda Comak (Sr. Director of Baseball Communications with the Nationals) has given hope for a post featuring Max and Katie. The hard evidence may not suggest it, but if you know the Nationals, you have to assume they all freaked out so hard.

When you’re sitting at your locker and Olympian/world record holder @kledecky walks in, you drop everything and get a picture #boss #rio2016 #nats

Glad I was able to meet @kledecky (Katie Ledecky) today before our game. Absolute domination in Rio!

I’m telling you, everyone was all about Ledecky.

Everyone standing as Katie Ledecky is shown on the video board here. Huge ovation. The Bethesda-native is beloved. pic.twitter.com/BKdoRDZqF0

Here’s hoping this is enough to distract from this Not Great Baseball kick the Nationals are on. Don’t mind the six losses in nine games behind the curtain: Katie Ledecky heals all wounds and dilutes the pain of any deficit. It’s fine. Everything’s fine. Just look at the most perfect picture the world has to offer and think about Bryce Harper winning a gold medal.

What a gold’s! Was a pleasure holding something so valuable and important to this great country🇺🇸 2020 Olympics here I come, I need to get 1 of my own so I don’t have to just hold Katie’s! #USA