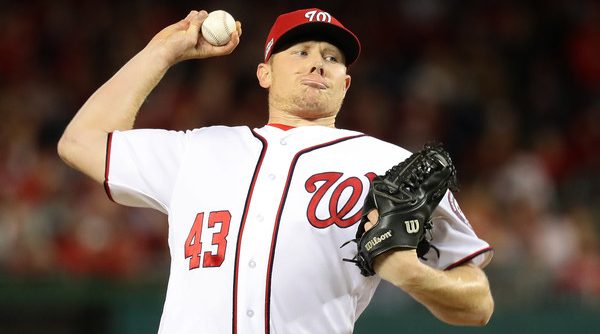 The Chicago Cubs won the 2016 World Series, and that strangest of victories sent us into this strangest of offseasons. The weakest free agent class in memory means teams will have to battle for very few players or get creative in trades and with internal options.

This series of posts will serve as a review of 2016 and a preview of the many avenues the Nationals can go this winter. I went through each position on the team and listed where the Nats ranked in baseball by WAR for position according to Baseball Reference (I’m referring to the third table on that page).

I then thought about whether the team could improve on the output it had from that spot in 2016, whether that comes from offseason additions, internal changes, or simply a return to form by existing players. At the positions where the Nationals may find a solution via trade or in free agency — namely closer, catcher, and center field — I looked at the available options and weighed which would be best. The Nationals’ budget is somewhat thin this offseason, so they will likely be unable to pick up the best choice at each spot, but this series largely considers each position separately.

Room for improvement? A little

It might be hard to believe that the third-best rotation in baseball last season has room to grow, but this is a supremely talented bunch. Cy Young winner Max Scherzer and stalwart Tanner Roark led the way with 6.2 and 5.5 bWAR respectively, but this group dealt with a few injuries along the way. Stephen Strasburg and Joe Ross both missed significant time with injuries and were replaced by AJ Cole, Reynaldo Lopez, and Lucas Giolito, who combined for -0.8 bWAR in 18 starts. It’s not hard to see Ross and Strasburg pitching full seasons and making this unit even better than it was.

Unlike some of the other positions I’ll discuss, improvement for the rotation likely won’t come through any offseason transactions. The free-agent starting pitching market is weak, meaning that trade prices will be high — potentially creating an appealing situation for the Nationals to deal Gio Gonzalez. The Nats could also look to deal Gonzalez (or another pitcher) and replace him with another pitcher added via trade — something we know is a definite possibility now that the Nationals have checked in on White Sox ace Chris Sale. But by their nature, blockbuster trades are unlikely. And none of Cole, Lopez, Giolito, or Austin Voth has shown that he is ready to step into the fifth starter’s role, so even sending off Gonzalez seems unlikely.

Room for improvement? A little

If you’ve been reading the rumors, you know the headline here is the Nationals’ pursuit of a closer. But before we delve into that, let’s take a peek at who’s sticking around. Blake Treinen and Shawn Kelley were the two stalwarts, as they posted a combined 125 innings of 2.45 ERA ball. Their fielding-independent numbers were somewhat higher, with Treinen’s FIP outstripping his ERA by over a run, but his usage helps explain the discrepancy. He often entered with under two outs and a runner on first to specifically induce a double play, and he did so with great success. He led all relievers with 17 double plays induced, and generated ground balls at an impressive 65.9% rate.

Sammy Solis also found his way into the “stalwart” category by the end of the season, throwing 41 innings with a 2.41 ERA while batting health issues. Other returning relievers include Oliver Perez, who became near unplayable at the end of the season and may be a DFA candidate, and Koda Glover, the fireballing rookie who struggled through an injury down the stretch.

The rest of the relievers who threw at least 10 innings can be split into three groups: returning starters (Cole, Lopez, Giolito), pitchers with bad ERAs who won’t be back (Jonathan Papelbon, Felipe Rivero, Yusmeiro Petit) and pitchers with good ERAs who are free agents (Mark Melancon, Matt Belisle, Marc Rzepczynski). While Melancon’s stellar half-season will be hard to replace unless the Nationals land a stud closer (or re-sign him), his value is largely washed out by the high-leverage egg that Papelbon laid for half a season. That means the Nats don’t need 70 innings of 1.50 ERA ball to improve on what they got out of their 2016 closers.

Belisle was stellar for his 46 innings and that value will be missed, but even considering his likely departure, there is real room to improve in the relief corps (non-closer division): at swingman. Petit got by for half a season before faltering down the stretch, and a long reliever with even an average ERA would be a big improvement. In addition to the five relievers I highlighted as returning, the Nats will have two spots to fill in their bullpen. One will be a long man, a position for which I believe Cole and Voth are strong candidates.

The other bullpen slot is reserved for a closer if the Nats can get one, and we have now arrived at the part you were all waiting for. Melancon, Aroldis Chapman, and Kenley Jansen are the three big fish, and there’s no wonder why: Jansen had the highest ERA of the three last year… at 1.83. But given the prices they are likely to command, Jansen makes the most sense for the Nationals.

Chapman, it must be said, was suspended 30 games last season for domestic abuse. His actions are disgusting, and I was pleased that the Nationals halted their pursuit of him last offseason when the allegations against him became public. But given Dusty Baker’s tactless comments on Chapman and the comparative silence about his actions this offseason, I fear the team’s hesitancy to acquire him will dissolve. It goes without saying that I would be loath to have a person like him on the Nationals. The rest of this article includes analysis of Chapman as a player, but I stress that his crimes far outweigh his abilities on the field.

FanGraphs predicts Chapman will sign a staggering six-year, $105 million contract, while it pegs Jansen for five years and $85 million and Melancon for four years and $60 million. In addition to his off-the-field behavior, Chapman relies on his (incredibly fast) fastball to compensate for his relatively poor command. If his velocity slips — and if you sign him for six years it will — it’s not impossible to see him becoming 2016 Trevor Rosenthal (97 mph average fastball, 6.47 BB/9, 4.46 ERA). He is the youngest of these pitchers at 29, but a six-year deal would take him through his age-34 season. Of course, this is a very pessimistic case, and Chapman is likely to be a very successful reliever for a long time. While $105 million seems like a lot, Chapman only needs to hit about 2 WAR per year to be worth it (assuming $8M/WAR). And with a closer’s outsized playoff importance, the value he brings is even greater.

Melancon has a very different profile, but somewhat similar risks. He gets by on great command (1.51 BB/9 last year) and an ability to get grounders (54.2% last year). But he’s the oldest of these closers: He’ll be 32 next season. The velocity on his cutter — his primary pitch — has already fallen by over 1 MPH since 2014, and any further slip might see those grounders turn into line drives. On the other hand, he’s had the lowest ERA of all three closers over the past four years and will come at the lowest price. If the Nationals can get him on a three-year deal, it’d be hard not to like.

Jansen is the best of both worlds. His cutter averages almost 3 mph more than Melancon’s, and he has Melancon’s pinpoint command while being the same age as Chapman. He also was originally developed as a catcher, potentially meaning that he may have less wear on his arm. FanGraphs projects him to get less money than Chapman because he was tendered a qualifying offer, but that could be a blessing in disguise. Teams attempting to sign him will pay him less because they will need to pay a draft pick, but the Nationals will pick 28th overall, making the draft pick they’d sacrifice lower than that of all but two other teams.

Should the Nationals find those closers not to their liking, they will not be without other options. Former Royals All-Star Greg Holland is a free agent 18 months removed from Tommy John surgery. His velocity was wanting in a recent showcase, but he will come cheaply. Current Royals All-Star Wade Davis has one year left on his deal, and the Nationals came calling about him at last year’s trade deadline. But his results were down last year and he will be expensive, both in dollars (he will make $10 million in 2017) and prospects. Other trade options could include Steve Cishek, David Robertson, and, if you believe Jim Bowden, Andrew Miller.

Part two breaks down the infield, including the catchers in light of Wilson Ramos’ free agency. You can find it here.