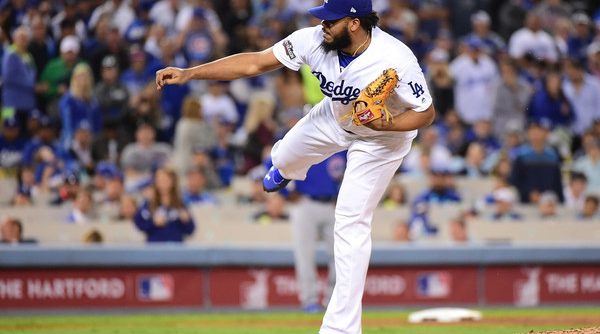 No offense to Cecil — I’m sure he’s a great guy — but if he is now a $30 million man, then true shut-down relievers are going to command massive paychecks this offseason. MLB Trade Rumors projects Aroldis Chapman, for example, to pull in a five year $90 million deal before the 2017 season kicks off. MLBTR writer Jeff Todd was on my podcast last week and explained MLB teams’ thinking in giving away such big contracts to relievers, and it’s not hard to come around to that line of thinking. You can pay a dominant reliever like Chapman and effectively shorten the game by at least one inning with the same money it takes to sign a back of the rotation starter. The Nationals don’t need a back of the rotation starter. But, wouldn’t you know it, they do need a closer!

It’s not hard to understand the appeal of signing Chapman (though his domestic violence past has to factor into the decision to sign him), Kenley Jansen, or Mark Melancon. All three have been effective closers for several seasons and would certainly shore up the back of the Nationals’ bullpen. However, I’m going to make the argument that signing one of the big three free agent closers this offseason is not a good use of the Nationals’ payroll.

For starters, relief performance is very hard to predict. While it may seem like Chapman, Jansen and Melancon are safe bets, history would say otherwise. As a quick investigation, I pulled every relief pitcher who earned at least 5 saves in 2015 and compared their 2015 results to their 2016 performance. Of those 47 relievers from my 2015 data set, 34 recorded fewer saves in 2016 than they did in 2015. Saves are a stupid statistic, you may say. And I would agree. So let’s look at ERA. Forty — 40! — of those same relievers saw their ERA go up from 2015 to 2016. Even ERA can be a little fluky, so how about K/9? Thirty two of the 47 relievers saw a decrease in their K/9 rate. These guys were supposed to be some of the best relievers in baseball, deemed worthy by their club of closing out a game. But they couldn’t sustain it year over year.

Sure, that list includes some guys like Brad Boxberger and Trevor Rosenthal who dealt with injuries in 2016. But it also includes former shut down relief arms like Darren O’Day, Dellin Betances and Craig Kimbrel as guys who pitched worse in 2016 compared to 2015. Were any of those guys terrible in 2016? No, but the Red Sox sure didn’t trade away a boat load of prospects to have Kimbrel put up a 3.40 ERA after pitching to a stellar 2.58 ERA in 2015.

The Nationals themselves have firsthand experience in the best and worst that comes with big name bullpen arms. The Nationals welcomed Rafael Soriano to the bullpen in 2013 in one of the few deals for a big name relief pitcher in Nationals’ history. Soriano had a sub 3.00 ERA in four of his five previous big league seasons and only 15 blown saves total. Yet both seasons in DC saw him go over that 3.00 ERA and blow 13 saves along the way.

The Nationals have also been on the beneficial end of the relief pitching roller coaster, though. The Nationals signed Matt Capps for the 2010 season on a one-year deal, hoping to see improvement off of his 5.80 ERA in 2009. Capps delivered, becoming the Nationals’ closer and posting a sub 2.50 ERA. He pitched well enough that the Nats were able to flip him to the Twins for Wilson Ramos. He was good enough in his time with the Twins in 2010 to sign a longer term deal starting in 2011, and immediately posted a 4.27 ERA and never sniffed the closer’s role again.

Now, if the team in consideration here was the Dodgers, the calculus would be different. They have Scrooge McDuck money. They can go out and sign Chapman to a $90 million deal with plenty of cash left over to fill out the rest of their roster. And if Chapman craters this year or down the line? They can sign or trade for a replacement. However, Mike Rizzo doesn’t have a “blank check” this offseason. The Nationals have multiple positions that need upgrading. The team has a hole at either centerfield or shortstop, a hole at catcher, and some holes on the bench. As we have covered here recently, there are other relief options on the free agent market, on the trade market, and internally that could fill that void in the bullpen. Instead of devoting a significant chunk of the payroll to Melancon, Rizzo would be better served to go sign Dexter Fowler to play centerfield everyday than make a bet on a reliever.