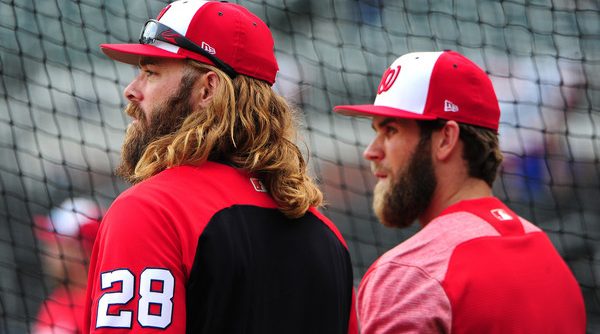 Right now is an incredibly exciting time for sports here in the District; the Nationals currently lead the NL East and are one of the best teams in baseball, the Wizards are leading a playoff series against former playoff-rival Atlanta, and the Capitals begin their round two playoff series against the hated Pittsburgh Penguins this evening. As someone who grew up playing several different sports growing up, I have carried that interest into adulthood and at times this MLB season, I have strayed from the path towards these other more do-or-die sporting competitions.

The parallels between the three franchises are obvious:

In honor of the Capitals beginning their second round series tonight and without further ado, I have taken it one step further and drawn some individual player parallels between the Nationals and Capitals:

Bryce Harper is Alex Ovechkin: Sometimes the obvious one is obvious.

Adam Eaton is Braden Holtby: Both players were never top prospects coming up through their respective systems but have made an incredible impact at the top level, with Holtby winning the Vezina Trophy in 2015-16 and Eaton becoming a sabermetric darling, leading his team in WAR for the last two seasons.

Tanner Roark is John Carlson: Not only are both players American Champions – Tanner with a WBC Gold Medal and Carlson with a World Juniors Gold Medal – but both players are stalwarts on defense. Carlson routinely leads the top defensive pairing for the Caps, while Roark has more than one Gold Glove in his future.

Koda Glover is Evgeny Kuznetsov: Young players who show flashes of sheer dominance but are still quite raw. The rest of the league needs to watch out if they harness their untapped potential.

Anthony Rendon is Nicklas Backstrom: Neither Rendon nor Backstrom is going to be the flashiest of players, but at the end of the year you look at the numbers dumbfounded by how outstanding they actually are. They are “glue” type players.

Blake Treinen is Andre Burakovsky: This one here is a bit of hopeful projection. Burakovsky spent a portion of the middle of the season on Coach Barry Trotz’s naughty list and was benched for a couple games but took it well and returned as a solid contributor. Here’s hoping Mike Rizzo, Dusty Baker, and Treinen all read this because a few trips on a bus could do Treinen some good right now.

So there you have it, far from a complete list but a fun one none the less. I’d love to hear what other player comparisons you can come up with – shoot me a tweet @CraigMac.