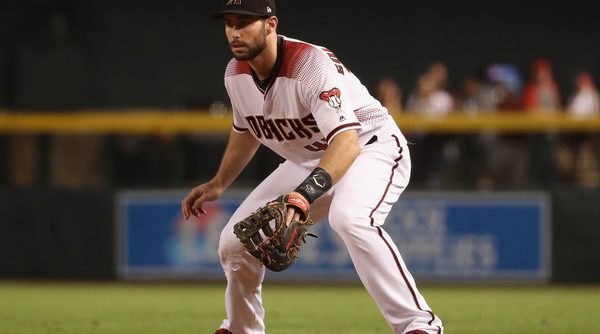 This is the only finalist that didn’t surprise me. Paul Goldschmidt has perennially been one of the best players in the National League for the last few years, finishing second in MVP voting in both 2013 and 2015 (along with 11th in 2016), yet he’s never been able to bring home the award. This year might be his best chance. Goldschmidt put up one of the best years of his career, and unlike his MVP-worthy seasons of the past, this year the Diamondbacks made it to the postseason, marking only the second time Goldschmidt has ever tasted playoff ball (the first being in 2011, Goldschmidt’s rookie year). The DBacks making the playoffs would likely help Goldschmidt get that boost in voting he hasn’t gotten in previous years; he’s the only finalist from a playoff team.

So what do the numbers look like? In short: good. Goldschmidt hit a solid .297 with 36 home runs (T-6th in NL, ties his career high), 120 RBI (4th in NL), 117 runs scored (3rd in NL, his career high), 94 BB (4th in NL), a .404 OBP (5th in NL), a .563 slugging percentage (8th in NL),  a .966 OPS (5th in NL), and a 5.8 WAR (according to Baseball Reference). He also snagged 18 stolen bases, which is impressive for a guy known primarily for his power. Goldschmidt also dominated at home, hitting .321 in the home unis, along with slugging 20 of his homers in Arizona. Goldschmidt also came up big in the clutch, hitting .365 and driving in 81 RBI with RISP. He also contributed with the glove, playing an excellent first base where he only committed four errors all year, and bringing home a nice, shiny Gold Glove award.

Maybe his numbers don’t lead the league, but he produced consistently all season long, and is one of the best all-around players in the game. He can hit for power, average, use his speed, and play great defense. And, unlike his MVP competition, he is the only one who got his team to the postseason.

Giancarlo Stanton was one of the biggest stories of the season. He did something we all knew he could do (hit homers), but this year he went absolutely bananas and hit homers at a historic rate. But is hitting homers enough? Let’s dig in.

Needless to say, Stanton crushed all of his career numbers and had a historic season. The numbers say he’s worthy of winning that MVP. However, he failed to get the Marlins to the postseason. In fact, all of his heroic efforts couldn’t even get the Marlins to a 500 record (the team went 77-85). Stanton has never been to the postseason in his career, though that may change soon. The change of Marlins ownership may send the potential MVP away from Miami (it seems silly to me to trade away the only thing bringing fans into the ballpark, but what do I know, I’m not a baseball executive). The big question is: if Stanton’s historic season couldn’t even get his team within grasp of a playoff spot, then was it really an MVP season?

We always seem to forget about Joey Votto, just doing his thing in the basement-dwelling team that is the Cincinnati Reds. Despite the team being absolutely horrific, Votto had himself a pretty good year, and his numbers are up there among the best, even leading a number of categories.

Votto had a very good season, putting up MVP-worthy numbers. However, like Stanton, he was the only bright spot in a rather forgettable year for his team. The Reds did not make the postseason this year, finishing last in their division. The Reds have not made the postseason since losing the wild card game in 2013. So I present the same question: can Votto’s season truly be an MVP one if his team, despite his efforts, finishes dead last?

Last year, it was pretty clear who the crop of players up for MVP were, and I named the top five MVP finishers months before voting happened. This year, it was all over the map, and I could name about ten players that could’ve won MVP this season, so of course there are going to be snubs. But I was just flabbergasted at the fact that a certain few weren’t named finalists.

Frankly, I’m absolutely floored Arenado wasn’t named a finalist. I thought he was going to win. Arenado had a monster year, even more so than his fantastic last couple of years, and it’s a crime he wasn’t even in the top three. Arenado is one of the most dynamic players in baseball, and I always love watching him play. To me, his defining moment was the Rockies’ game on Father’s Day when Arenado hit a walk off home run to complete the cycle. Arenado had a career year, and it was a shame he didn’t get named a finalist.

This snub should have Nats fans up in a riot. Anthony Rendon had an absolutely monster year, and nobody cared. No one talked about it, and no one even gave him the recognition or respect by giving him a nomination. Well, he won’t go unnoticed here.

Rendon hit .301, with 25 homers, 100 RBI (T-10th in NL), 81 runs scored, a .403 OBP (T-6th in NL), a .533 slugging percentage, and a .937 OPS, all of which were career highs (except for runs scored). He also had a 5.9 WAR (according to baseball-reference). And of course, he played spectacular defense, and should have won the Gold Glove except he has to compete with Nolan freaking Arenado at his position. Rendon had the year of his life, and I’d be even angrier on his behalf, except I suspect he’s just scratching at the surface of his potential and can play even better next season.

Honestly, it’s anyone’s guess. Any one of the finalists could go home with the award and I wouldn’t be shocked. I believe that the winner should be Paul Goldschmidt; he’s the one on the playoff team and had a monster year. However, I wouldn’t be surprised if it ends up being Giancarlo Stanton.