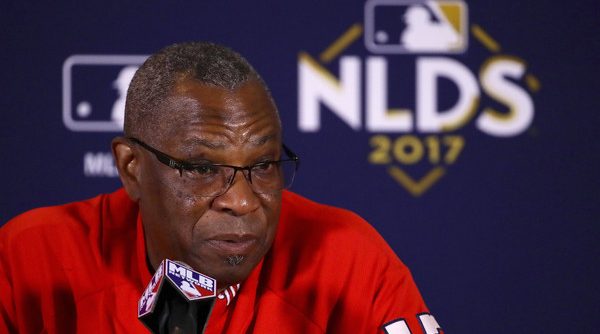 Baker, though, will be difficult to replace. It’s not his fault Wieters had a passed ball, error, and catcher interference that directly lead to two runs. He is a revered, experienced manager, who brings a lot to the table. He did a fantastic job this year. Mike Rizzo and the front office handed him the worst bullpen in the Majors for the first half of the season. He dealt with a spate of injuries: Bryce Harper missed 40 games to derail a possible MVP campaign; Trea Turner spent 10 weeks on the DL; Max Scherzer and Stephen Strasburg spent time on DL; Adam Eaton was lost in April; and Michael A Taylor and Jayson Werth spent time on the DL. The Nationals were going with an outfield of Adam Lind (great hitter, terrible fielder), Alejandro de Aza, and Andrew Stevenson. The Nationals survived because players like Brian Goodwin, Wilmer Difo, and Michael A. Taylor stepped up. Baker’s greatest strength is probably his ability to keep the 25th man on the roster involved, and considers them as important as the Harper, Daniel Murphy, Anthony Rendon, et al. The development of Difo, Goodwin, and Taylor, is at least in part to Baker.

The Nationals have a dubious record with managers. No manager has managed here for very long. Manny Acta, of all people, is the franchise leader in games managed. Davey Johnson, Matt Williams, and now Baker all lasted two full seasons. There are many rumors and reports floating around as to why, but the issue is clear: The Lerners do not value the manager position. Most teams offer managers three years, the Nationals never go beyond one guaranteed year with an option. This is going to make attracting qualified candidates difficult. The Nationals settled on Baker after they could not reach an agreement with Black. No one else was pursuing Baker, who wanted one more shot at winning a World Series. He agreed to a deal far less than what we received at his last stop in Cincinnati. Add to their history, there is a lot of uncertainty to this franchise, after this year. Everyone knows Harper is a potential free agent, but so is Murphy. Mike Rizzo’s contract ends after 2018 as well. After 2019, Rendon and Strasburg could be on the market. Will a qualified manager want to come here with all of that uncertainty?

Despite those questions, this position is still very attractive. This team has a lot of talent. The rotation is the envy of most of the league: Scherzer and Strasburg will be in the top 5 in Cy Young voting, with Scherzer most likely winning his second consecutive award. Roark will not have the World Baseball Classic this year, and should rebound from a sub-par season. Gonzalez is still a solid number four starter, despite his Game 5 meltdown. The fifth starter spot is up in the air, given the health of Joe Ross and Erick Fedde. The bullpen will include a bonafide eigth inning setup man and a closer all season, as Ryan Madson and Sean Doolittle are under contract. Kinzler is a free agent, and will probably sign elsewhere. The team will need to add an arm or two to avoid the pitfalls of early 2016.

The lineup is still very good—and should be one of the Majors best again. The outfield in particular is outstanding. While Werth’s contract is up, Adam Eaton is a significant upgrade. For all Werth has done for this franchise, Father Time is undefeated, and he has come for the Beard. He was a -0.3 WAR player. In 2016, Eaton was a 6.2 WAR corner outfielder. While no one should ever wear #28 again, it is time to move on. Michael A. Taylor was baseball’s second best centerfielder, by 0.1 dWAR to Byron Buxton, despite playing 200 fewer innings. He broke out at the plate this year, and was the offensive hero of the NLDS. Whether that continues or not is questionable—his peripheral stats are mostly in-line with his career numbers, with a slight uptick in hard hit percentage. The only real difference is an approximate 50 point jump in BABIP and a spike in ISO. Even if he is a .250/.300/.425 hitter, his defense is more than good enough to make up for a 30% K rate. If he doesn’t continue his production from last year, Victor Robles is ready to take his place.

The infield and the bench should still be very solid, even with the Murphy’s knee surgery. Zimmerman is due for regression, but the left side of the infield should still be fantastic. Turner should be healthier, and Rendon is still one of the best players in the game—even if no one talks about him. Having Turner and Eaton at the top of the lineup (and potentially Robles) is tantalizing for any manager candidate. The bench is very good, Difo and Goodwin provide good depth, Adam Lind should return, and the Nationals should look to re-sign Kendrick (and promise him more post-season at bats, if the Nats make it).

As Svrluga says, the next manager is going to come into this position facing immense pressure: A World Series is the goal, period. Only Boston can offer the roster the Nats can — and the Nationals roster is better, top-to-bottom. The other openings are developing teams like the Phillies, or complete dumpster fires like the Mets. Despite all there is to like about this team, the Lerners will have to add stability and certainty to the manager position. With the potential turnover in the next two years, the Nationals will have to break with their mold of offering one guaranteed year with an option. Otherwise, the candidates the Nationals will attract are the first time managers with few other options, or retreads like Ozzie Guillen.