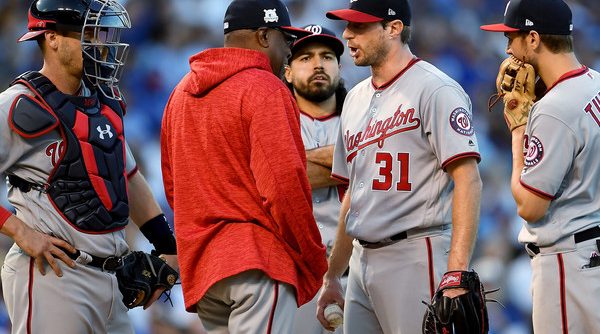 The hell of the postseason is over, and now it’s time for the nightmare of the offseason to get into full gear. But before we submerge ourselves into that completely, let’s take a moment to look back and get a little nostalgic about the season that was. And yes, that means it’s time to indulge in award season.

Some of the awards have already begun to trickle out, such as the Gold Gloves, but everyone’s looking forward to the big four: Rookie of the Year, Manager of the Year, Cy Young and MVP. The finalists for all these awards have already been announced, and I want to try to dig into them and try to pick out who has the biggest likelihood of winning. I won’t get into MOY or ROY winners, but I’ll be taking apart the other two awards, and I’ll be sticking to the National League because how else would I be able to bring the Nats into it? Today, we dig into the Cy Young award.

There aren’t too many surprises here. All three of the finalists have very good cases to win. And, in a wonderful development, two out of the three finalists are Washington Nationals.

Kershaw has a couple of advantages: his reputation alone is enough to get him support for the award, and he led the Dodgers to an MLB-best 104 wins. Additionally, the other two finalists are teammates, which could play to his favor if they end up splitting votes. However, he does also have a number of factors going against him. None of his numbers this season are anywhere close to his career highs, which theoretically shouldn’t matter, but it doesn’t play in his favor. He missed a significant amount time with an injury, which led to some decreased productivity in the second half: from first to second half, his ERA increased from 2.18 to 2.74, his BAA increased from .195 to .263, his strikeout to walk ratio decreased from 7.23 to 5.38, his BAbip increased from .249 to .325 and he only pitched 42.2 innings and only won 4 games. His numbers aren’t exactly bad, per se, but the difference from first to second half is a little alarming. That being said, and with the way voters are, all of that could easily be forgotten, and him winning the award is very much in the realm of possibilities.

The reigning Cy Young award winner has the chance to repeat. The two-time Cy Young winner and five-time All-Star has taken 2016’s brilliant campaign and built upon it, posting better numbers in almost every category.

The one big point against Scherzer is that he dealt with a nagging injury in the second half, causing him to miss time for the first time in his career. Despite this, he still managed to pitch over 200 innings and lead the league in strikeouts. Though his second-half ERA struggled because of his nagging injuries, he did have a 6-1 record in the second half.

Scherzer has some of the best stuff in baseball, and his attitude makes him one of the most entertaining pitchers to watch on the mound. He might not have had a no-hitter or a twenty strikeout game in 2017, but he pitched better than he ever has, and it might just be good enough to win him his second consecutive and third career Cy Young award.

Stephen Strasburg is a Cy Young finalist for the first time in his career. He’s always had electric stuff, but this year he finally had the health to put together a Cy Young-caliber campaign. Strasburg’s late-season (and postseason) efforts were some of the best I’ve ever seen, and if he’d pitched at that caliber all season long, he’d win the Cy Young without contest. Not that his early season was anything to sleep on, he was an All-Star, after all.

Strasburg finished the season with a 2.52 ERA (3rd in NL, a career high), a 15-4 record (his .789 winning percentage is tied for his career high), 204 strikeouts (7th in NL), a 1.02 WHIP (3rd in NL, his career high for a full season) and a .204 BAA (3rd in NL). As mentioned previously, Strasburg had a monster second half, with a minuscule 0.86 second-half ERA. Additionally, he kept opposing hitters to a .184 batting average with men on. He ended the season with 6.5 WAR (according to baseball-reference), which almost doubled his previous high of 3.3. And he topped it all off by smacking two home runs and driving in three RBI.

The only thing going against Strasburg was that he missed a little bit of time with injury in the middle of the year, but all three finalists lost time due to injury, so it’s not going to hurt him all that much. Strasburg was the best pitcher on the planet during the last few weeks of the season and was absolutely dominant during the postseason, doing his darndest to try and drag the Nationals through the NLDS. Can his strong second half bring him his first career Cy Young award? It’s possible.

As with all awards, there will always be snubs who were worthy of being finalists or even winning the award. Among National League pitchers, there were two notable names left off the list.

After a disappointing 2016 campaign, Greinke returned to form in 2017, as the Diamondbacks ace headlined a strong pitching rotation and led the Dbacks to their first playoff berth since 2011.

The four-time All-Star has four gold gloves and one previous Cy Young to his name (with the Royals in 2009), but his stellar work this year didn’t stand up well enough to his competition. Though, his efforts didn’t go entirely unrecognized: Greinke was one of the three finalists for NL Outstanding Pitcher as voted on by the players, joining Kershaw in losing the award to Scherzer.

2017 was the year of the Gio snub. No All-Star game and no Cy Young nomination, when he clearly deserved the former and had a good case for the latter. Gonzalez had the year of his life and finished with nothing to show for it.

Gio was one of the surprises of the season for the Nationals, but he was overshadowed by his teammates, Scherzer and Strasburg. His fantastic year was highlighted by his almost-no-hitter in his hometown of Miami, paying tribute to the late Jose Fernandez and getting a standing ovation from the away crowd. Gio had a season for the ages, and it’s a shame he didn’t get more recognition for it.

This one’s a tight one. Kershaw, Scherzer, and Strasburg lost some time due to injury, so they all offset each other in that department. Strasburg dominated in the second half while the other two lost some footing, but Kershaw and Scherzer led every pitching category. There’s a possibility that Scherzer and Strasburg could split votes. In my eyes, it could be a coin flip between Kershaw and Scherzer, but I see Scherzer going home with the award. Hopefully, we can get a victory shot on a boat again this time.

It’s no surprise that the future Hall of Famer and one of the best pitchers of this era is up for his fourth Cy Young award. The seven-time All-Star and 2014 MVP has done this time and time again, and his nominations almost seem old hat at this point. But he’s put up a strong case for Cy Young yet again.