The 2018 baseball season is around the corner, and this week, we got a preview of the on-field look for the Washington Nationals. This season has Nats fans attention specifically as the All-Star game will roll through town in July. Overall, not much changed from what 2017 brought us for the regular season, just one jersey addition and a fresh slate of holiday uniforms. Let’s take a look at what the Nats will wear this season. 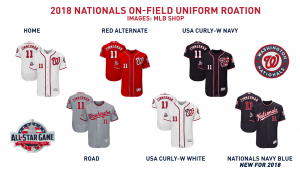 The Nats will return with the traditional home white uniform with blue and red trim, the iconic red Curly-W logo on the left chest and number on the right side. The gray road uniform remains the same with a script “Washington” across the front.

The alternate uniform options grew by one this season, as an all-navy top joins the rotation with the “Nationals” script across the front. It made its debut at Winterfest this offseason. The uniform’s neck design mirrors the road uniform, avoiding a deeper cut like the rest of the home uniform options. It’s unclear if this will remain a permanent fixture within the uniform rotation, but it won’t replace any existing uniforms. It’s a welcome addition to see the script “Nationals” wordmark as an on-field option.

A remaining feature in the alternate options is the return of the star-spangled Curly-W that the team has worn in navy-blue for several years along with a white version that was added last season. Additionally, the traditional alternate red uniform with a white Curly-W returns to the carousel of options.

A special addition to this season’s uniforms is the official All-Star Game logo on the jersey’s right sleeve, which sits opposite the Nationals official logo. 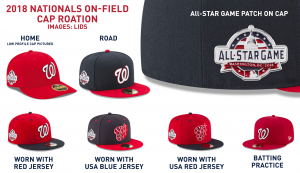 The Nats hat rotation remains unchanged this season with one minor footnote: The team added alternate caps for their patriotic jerseys last season, creating caps with a red top and blue bill in addition to its inverse with the star-spangled Curly-W logo in place of the traditional white Curly-W. The all-red home hat stays in place. The road hat will remain the blue top, red bill combination. The simple red alternate uniform will remain paired with the red top, blue bill cap.

What remains uncertain is what will be worn with the new navy blue uniform. My guess is the road hat.

Spring training has already given us a look at what the batting practice caps will be for the season, as MLB and New Era unveiled the “ProLight” caps. It’s essentially a different material with a non-embroidered team logo on the front and the MLB logo on the back. The caps are an exact mirror of the home caps, all red.

As has become the tradition for the team who hosts the All-Star Game, all hats will be paired with the same full All-Star Game logo as is on the sleeve. This is a small change from what’s been done with teams in the past, as the simplified “ASG” logo is substituted for the full logo on these caps. 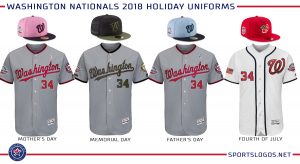 Memorial Day has become a regular in the MLB schedule for custom uniforms, this year is no exception as the league rolled out a uniform set like last season’s. The hats have an olive green brim and black camouflage top. Five stars are the right side to represent the branches of the United States military. The Memorial Day uniforms will be worn on May 26 – 28, 2018 on the road at Miami and Baltimore.

July 4th uniforms are in a similar boat as the Memorial Day uniforms. The jerseys are like what was used last season, but the hats are noticeably different. The Nats will don a simple all-red cap much like their home hat, except the curly-W is trimmed in gold and the National League logo is on the right side in place of the All-Star Game logo. The underside of the brim has some fancy artwork featuring the text “WE THE PEOPLE” from the Constitution in white underneath. It was always a curious choice to force the Nats and other teams who have an existing country or military themed uniform away from those options, however here we are anyway. The Fourth of July uniforms will be worn July 2 – 4, 2018 at home when Boston visits DC.

Mother’s Day (May 13) and Father’s Day (June 17) are more recent additions, as the themed uniform elements return for the third year, but with no new jersey this time around. The caps are a variant of the pink or baby blue used in year’s past with darker shades of the same color family highlighting the Curly-W and brim. The All-Star Game logo patch is on these caps. 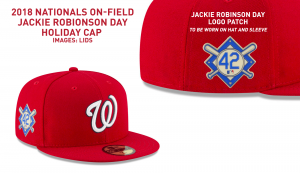 All special holiday jerseys will come with special socks to match.

Is MLB saving the best for last? The All-Star Game is a showcase of the host city and the host team. As of this post, we don’t know what they look like, but expectations are high as the midsummer classic comes to DC this July.

Pictures and information were found via MLB Shop, Lids.com, and Chris Creamer’s SportsLogos.net.