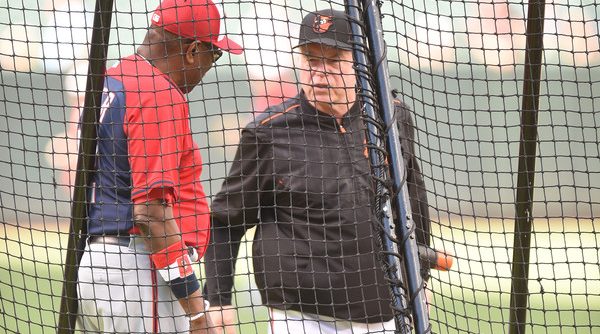 Monday will mark the beginning of the annual interleague series between the Washington Nationals and Baltimore Orioles. Starting with the first contest in Baltimore, the teams will play four games, with the first two slated for Oriole Park at Camden Yards before the matchup shifts to Nationals Park on Wednesday and Thursday.

The proximity between the two teams has led to an interleague staple since the Nationals arrived in D.C. in 2005, and has appealed to fans in both cities. Yet, after all these years, it still seems fair to question if the Orioles and Nationals are true rivals and, if so, to what extent?

Before I delve into this, some personal context: Most of my family is from Baltimore, and I now reside there and attend Orioles games regularly. However, I grew up in Hagerstown, going to Hagerstown Suns regularly and even working for the Nationals from 2008-2012. Since then, I have written about both teams on a regular basis.

Having a background in both sides and seeing countless games at both ballparks, I have formed this perspective of the rivalry. It is a fun matchup, but the tendency to oversimplify the Baltimore-Washington area in geographic terms sometimes has a way of clouding the fact that these are distinct teams, in distinct cities, with fans that have their own interests. There are some fans of the Nationals would never call themselves Orioles’ fans and vice versa, but they would likely admit that other matchups carry far more importance.

In Washington, the Mets would among the teams at the top of the list as a rival, while Baltimore’s main antagonists are the Red Sox and Yankees. Expanding it to look the broader sports scenes in both cities, the Red Sox and Yankees are just warmups for when the Ravens and Steelers meet in their yearly matchups that inevitably end in sudden disappointment and manage to ruin family gatherings. For Washington, there is the Redskins/Cowboys and Caps/Penguins—both of which likely exceed any rivalry the Nationals have during baseball season.

The other factor, too, is that the Orioles and Nationals matchups tend to be relatively low key. With one notable exception — when Jonathan Papelbon hit Manny Machado with a pitch during a September 2015 game — they have not been tension-filled contests, and it took until 2012 for both teams to be relevant enough to make their meetings the least bit intriguing.

This series will be a little different, as the Nationals’ now feature a former Oriole whom many once believed would be key to reversing the team’s fortunes and emerge as the face of the franchise — I speak, of course, of Matt Albers. And with both teams competitive at this stage in the year, and the games should be well played and their outcomes could prove down the road to have some implications.

For that reason, these games will be fun to watch, and there will surely be fans that take advantage of the opportunity to catch action at both ballparks. Once it ends, however, the Orioles and Nationals will go back to their unique existences — going in the same direction, but never crossing paths as they try to knock of teams who have a greater influence over the outcomes their respective seasons.