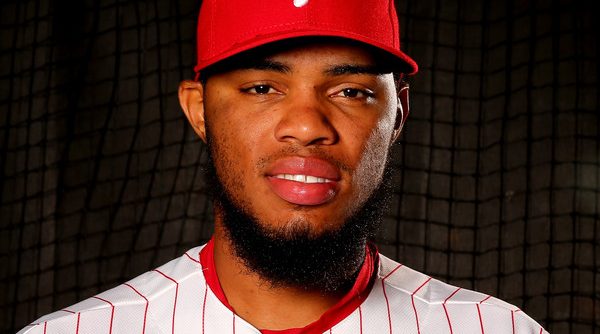 After being DFA’d by the Phillies during the offseason, Jimmy Cordero was given a new opportunity when he was traded to the Nationals in exchange for a PTBNL a few days later. Cordero spent much of 2016 battling a shoulder injury, limping his way to a disappointing 5.00 ERA and a career low 6.3 K/9. Once considered a potentially elite back of the bullpen prospect, injuries derailed Cordero’s career. With a fresh start and an invitation to spring training, Cordero was ready to put his injury plagued 2016 behind him and focus on earning his first major league call up. However, things quickly went south for the young Dominican.

Following a disastrous late April relief appearance in Altoona, it seemed like Cordero’s season was spiraling out of control. Cordero had given up 4 ER’s while only managing to record a single out and had given up at least 4 earned runs in 3 of his last 4 outings. Cordero’s outing against the Curve would prove to be his last outing of the month of April, a month that had been nothing short of a nightmare for the flame throwing Dominican.

In all Cordero made 7 appearances in the opening month of the season, and had only recorded a clean outing once. In fact, in the month of April Cordero had more outings with 4 earned runs than outings without four earned runs — not exactly inspiring results. Cordero crawled across April’s finish line with a Daniel Bard-esque 27.00 ERA, a WHIP just south of 5, and a .484 batting average against. By this point I hope you understand that April just wasn’t Jimmy’s month. Having given up a PTBNL and dedicating a 40-man spot to Cordero, the Nationals certainly hoped to extract some value from him, but instead witnessed a month long meltdown from the former Phillies and Blue Jays farmhand. With the Nationals bullpen struggling as it has, the inclusion of a 25 year old reliever getting punished in AA seemed less and less practical, and Cordero’s future with the team seemed in jeopardy.

It’s hard to pinpoint Jimmy’s massive struggles in April to a single factor, but were rather a combination of bad luck, ineffectiveness, and lack of control. In only 5.2 April innings, Cordero issued 13 walks, while giving up 16 hits, good for a H/9 and BB/9 both north of 20. Control has never been Cordero’s strong suit, but these numbers were high even for him. What was most concerning for Cordero, however, was the contact he was giving up. He’s no Austin Adams, but Cordero has found success by striking out batters and limiting hits, despite his inconsistent command. Whether these numbers are the result of a lack of confidence, a mechanical issue, or related to Cordero’s shoulder injury, it was clear that the Dominican righty was unable to effectively harness his raw stuff. Cordero’s batted ball percentages (normal LD%, GB%, and FB% and a high BABIP) tell us that bad luck played a role in his ineffectiveness, but they can only explain so much, and it was very clear something was wrong with Jimmy Cordero.

Following his historically bad April, Cordero has made adjustments that have helped him seemingly turn around his season. In 8 May appearances Cordero has improved dramatically, striking out 12 while walking 5 and allowing only 7 hits; good for a 2.70 ERA. Accordingly Cordero’s season ERA has plummeted all the way down to 9.95, reaching the single digits for the first time all season. Cordero’s resurgent ERA is supported by his peripherals as his BB/9 has dropped from over 20 to 8.53 (3.38 for the month) and his H/9 for May has been an Austin Adamsian (two mentions in one article, whew) 4.7. I don’t know if Cordero has simply rectified an issue he was having, or if he suffered the worst case of small sample size exaggeration ever, but whatever it was, it is seemingly behind the young righty.

With all this being said, one month of great pitching doesn’t change the fact that Cordero is still a 25 year old reliever who has struggled to put away AA hitters two seasons in a row. So the question remains, why should we care about Jimmy Cordero’s apparent resurgence? As I mentioned earlier, Cordero was once considered a legitimate back of bullpen arm when he was coming up with the Blue Jays, mostly due to the fact that he throws absolute gas. Although his shoulder injury has limited his fastball recently, Cordero has touched triple digits in the past, and his fastball sits in the high 90’s on a consistent basis. The issue with Cordero has always been command, and the lack of a true secondary offering. A 100 mph fastball will always be a weapon, but if Cordero can’t locate it consistently or hitters begin sitting on it, then that weapon becomes something of a double edged sword. Cordero also sports a slider that is currently still fringe average, but the pitch will need some work to play in the major leagues. Right now Cordero has two clear goals for the remainder of the season: work on consistently throwing strikes, and develop his slider into a true major league offering. Even if his slider ends up as only average, that should be plenty to complement his fastball and should be plenty to get the fireballing Cordero to the majors.

Cordero, along with the oft-mentioned Adams and Austin Voth, is one of only 3 pitchers on the Nationals 40-man roster with no major league experience, and appears to be the farthest away of the group. Despite his recent success, you can’t erase an entire month and there are legitimate concerns when a pitcher simply disappears for an entire month no matter what the reason. With that being said Cordero’s upside is tremendous, and his ability to dig in and rebound after the April he had says something about Cordero as a player and competitor. We can’t be sure whether April or May Cordero is the real Jimmy Cordero, but what we can be sure of is that the righty is trending upwards, and with the Nats bullpen in disarray any pitcher — especially one with Cordero’s upside — trending upside is putting himself in a position to potentially help the club sooner rather than later.