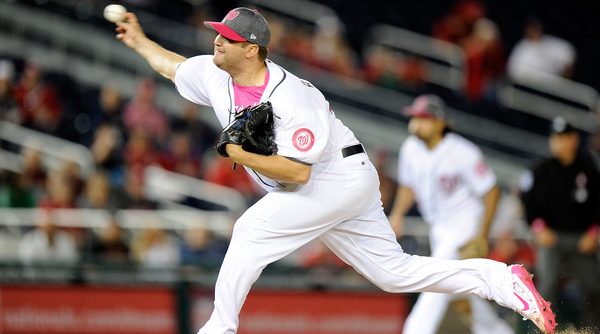 That was a tough week to be a Nats fan. Bryce Harper and Ryan Zimmerman hit like mere mortals, the starting pitchers not named Strasburg were average, and the bullpen continued to enter competitive baseball games and turn them into laughers. Mike Rizzo’s stars-and-scrubs approach to roster construction gave us a forgettable week of scrub moments.

It is important to keep some perspective, here: We are still just fans of a dumb team playing a dumb game. And for the last half-decade, this dumb team has made many more deposits than withdrawals. While the Nats dropped four out of six games this week — bookended by a pair of sterling Strasburg starts — we still got to watch Bryce Harper terrorize the batter’s box, Jayson Werth do Jayson Werth things, Trea Turner’s boundless energy, a fully-realized Stephen Strasburg, and Daniel Murphy teach a nightly hitting clinic.

That said, the team’s overall brilliance has waned since a supernova April, and the invested viewer might suffer a bout of heartburn picking through the negative results just for the moments of individual baseballing genius. Sometimes, for one’s own sanity, it is important to take a short break from being invested in the marathon of a baseball season. The Nationals have made many, many deposits in our emotional bank account —Strasburg’s debut, Bryce’s walkoffs, Scherzer’s historic efforts, Game 4, etc — and have made three sizeable withdrawals in recent Octobers. It is still too early in the season to start scrutinizing the balance sheet; we need to store up some funds for the high-stakes games September and October will hold.

A savvy move might be to step away from watching the team — and specifically, the bullpen — for a night, a series, or a roadtrip to ensure a healthy transactional relationship with the Washington nine. Spend some time with loved ones; finish that Netflix series you’ve fallen behind on since the beginning of April. If that is not enough, here are a few ideas to fill some time if you feel abandoned by the recent Nationals results; these pursuits are ranked, as usual, according to power.

A note: due to professional obligations the Washington Nationals Power Rankings will be taking a two-week hiatus. See y’all in June.