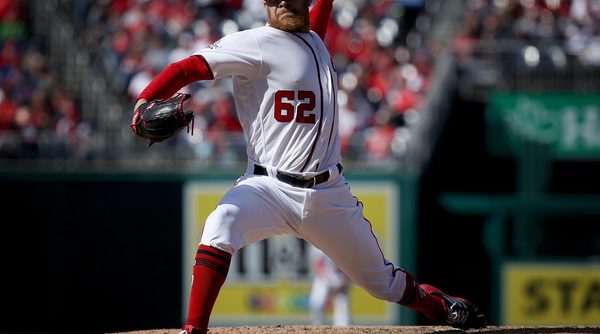 For the first time in what seems like forever, it’s May, and that Washington Nationals aren’t in first place in the National League East.

Why? Well, the bullpen hasn’t helped.

As of April 30, the Nats bullpen sits a cool 24th out of 30 in Fangraphs’ WAR, having added 0.2 wins above replacement in the team’s first 28 games. On that pace, the Nats ‘pen would add approximately 1.2 WAR over the course of a full season—last year, that would have ranked 26th.

Speaking of last year: what great bullpen memories those were. Across 2017, the Nats bullpen accrued 2.7 WAR, thanks in large part to the three late-inning arms the team traded for in July. Going into this season, you could forgive Nats fans for feeling good about the bullpen, especially knowing they were hopefully getting full seasons from Brandon Kintzler, Ryan Madson, and Sean Doolittle. Now, after eight one-run losses (and two wins), the question needs to be asked: what the heck is going on with these guys?

This is an easy one: Doolittle looks great.

Doolittle makes his bones on his fastball. He throws it nearly 90% of the time, which makes sense given that it ranks as one of the best in baseball among relievers.
Despite the cold temperatures to start the season, Doolittle’s four-seam fastball velocity has held steady at 95 mph. Per FanGraphs, it generates the most vertical movement in 2018 and rates as the third most valuable fastball among relievers.

There are, of course, reasons for caution. He hasn’t thrown more than 60 innings in a season since 2014 (think the Nats might lean on him this year?), and his strand rate and BABIP numbers are outrageously skewed. But while there’s negative regression to come, he’s also allowing home runs at nearly twice his career rate. The regression monster taketh; the regression monster giveth back.

The Nats’ eighth-inning man has given up nine earned runs in 13 innings this season. He coughed up six to the Mets two weeks ago, two to the Braves the week before that, before blowing his hold in the eighth inning against the Diamondbacks on Saturday’s extra-inning loss.

In his other 9.1 innings the 37-year-old hasn’t allowed a run, though he’s scattered six hits and eight walks in these appearances. When he’s not playing with fire this year, he’s getting burnt.

Last year was Madson’s best season as a professional. Though it sounds weird to say about a 15-year vet who won a World Series with the Phillies, everything clicked for him. His (*takes a deep breath*) K/9, BB/9, HR/9, BABIP, strand rate, and HR/FB% were all well below career averages. He struck out 30.6% of hitters he faced and allowed opponents to hit just .184. His K/BB% of 7.44% was fifth best among qualified relievers. By Fangraphs WAR he was the 13th most valuable reliever in all of baseball. Ryan Madson!

His fastball velocity is slightly up from 2017, but his pitch mix has changed drastically. This year, per FanGraphs, he’s throwing his four-seam fastball nearly 40% of the time, up 15 percentage points from last year. Accordingly, he’s throwing his sinker 15 percentage points less than a year ago, which brings us to an interesting fork in the road. Either he doesn’t trust his sinker at all this year or FanGraphs has wrongly defined 15% of Madson’s pitches. If that latter is true, that pitch might be getting so little movement as to render it four-seam-like to the pitch-tracking data.

Fewer of those heavy sinkers likely play a role in his 38% ground ball rate, 10% lower than his career average. But he’s also catching more than a bit of bad luck. Madson’s BABIP of .432 is the 5th worst among relievers (Sammy Solis BABIP is 6th worst for what it’s worth).

What’s more troubling is his inability to miss bats. He’s striking out less than 20% of hitters this year and is throwing more strikes than in years past. That’s been an issue, because hitters are swinging more often at his pitches in the zone (he has the 4th highest percentage of hitters swing at his strikes) and making harder contact.

We can probably expect some positive regression from that sky-high BABIP, but it’s probably worth monitoring how his pitch mix develops across the year, if he can corral a walk rate that’s currently twice what he posted in 2017, and if/when he starts to miss bats.

For the third amigo, the problem is clear: the walks are out of control.

He’s lost about one mile per hour on his fastball from 2017, and has more than tripled his rate of changeups thrown. This increase in changeups has come at the expense of the slider, which graded as his worst pitch in 2017. And so far, hitters seem puzzled. Kintzler isn’t known for missing bats, and he still isn’t in 2018, but he’s striking out more than a batter per inning and batters are swinging at a lower rate than ever before. While that patience seems to have driven up Kintzler’s walk rate, he’s happy to take a backwards K.

His peripherals are all solid: it really feels like he’s been bit by a lack of command and some poorly timed hits. If he can get those free passes under control and execute a little better with runners on base he can right this ship.

As for when the rest of the bullpen might right itself? That’s a story for another day.