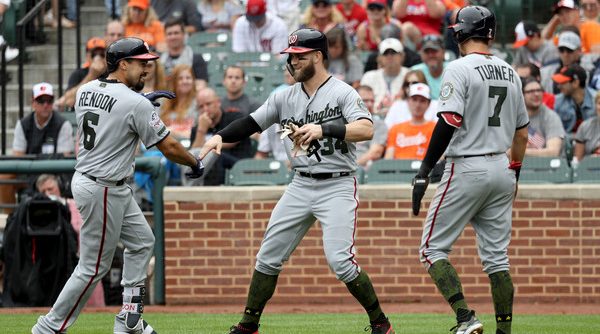 I’m sure I don’t need to tell you this, but the first couple weeks of this season were unpleasant. The Nats didn’t do so hot. They lost more games than we’re used to losing so early, and while that did make the wins more enjoyable, it wasn’t particularly good for my anxiety as I eyed the standings and divisional matchups and read all the reporters’ tweets about how the team was underperforming.

But the sun has finally appeared from behind the clouds. Despite the inexplicable amount of injuries, and the fact that our DL could start the All-Star Game, the Nats are winning, and not only that, they’re having fun playing baseball again.

Juan Soto was called up, and even though I live over 500 miles away from Washington, I could feel the anticipation for his major league debut in my bones. And he didn’t disappoint: Soto hit a 3 run homer on his first pitch in his first major league start and hilariously re-created Bryce’s iconic hair-flip (sans-hair) during the May 22nd game against the Padres.

Bryce leads the NL in home runs at 16, and when he’s not dominating on the field, he is being incredibly relatable by watching his hockey team (the Vegas Golden Knights) in the playoffs, often while cowering under a hoodie in fear or watching in terror from between his fingers.

Strasburg pitched a great game against the Marlins, assisting in the series sweep and tossing 23 consecutive scoreless innings against the team from Miami.

In other news, Trea Turner’s favorite player (for now) Anthony Rendon hit a very nice homer against the Marlins, and Daniel Murphy is doing well in his rehab assignment in Harrisburg.

Seeing your team do well is cathartic, but seeing them have fun while doing it? That’s truly a blessing. I hope I haven’t jinxed it by writing about it, and I’m looking forward to more antics, like the White-Out/Backstreet Homage and amazing facial expressions from the incomparable Michael A. Taylor. I hope you’re all having as much fun as I am watching the Nats this season, and I hope you never take it for granted.