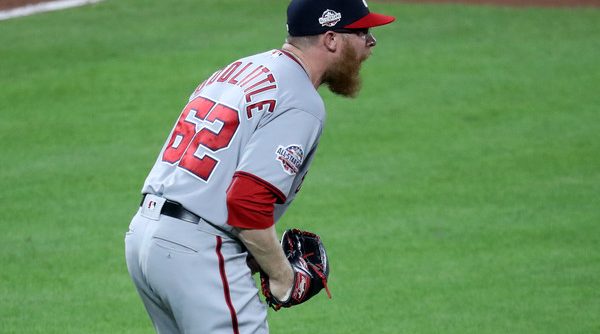 Until proven otherwise, the Nats’ bullpen will be “the thing.” Sure, the bats have gone cold in October, and Max Scherzer inopportunely tweaked his hammy last year. But the Bryce Harper Era for most fans will be defined by the bullpen. And Pete Kozma. Even now it’s a sore subject.

This year the bullpen (as a whole) has been league average, though that’s mostly inflated by a dominant Sean Doolittle than the result a collection of league-average-or-above arms. What’s worse is that peppered across the league are former Nats ‘pen arms who have found new, productive life on other teams. Craig Stammen is killing it for the Padres? A.J. Cole* is getting outs for the Yankees?? Drew Storen is still in baseball??? (Just kidding on that last one).

To drown our sadness, let’s play a game.

The Nats have used 14 bullpen arms this year, with yearly contracts that total approximately $29 million. Altogether, these pitchers have accumulated 1.2 WAR (eight have posted negative WAR, making Pablo Sandoval a more valuable reliever than more than half of the Nats pen). Using current and former Nats arms, can you build a better eight-man bullpen for the money?

So go ahead, choose your fighters and let us know, in the comments or on Twitter, how your bullpens stack up.

*We’re counting Nats A.J. Cole and Yankees A.J. Cole as two different pitchers. Why? Look at the numbers and tell me that’s the same guy.